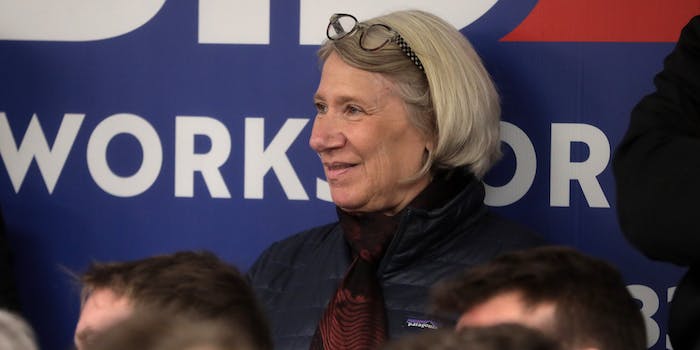 Let’s break down what we know and what’s just social media speculation.

In March, former Biden Senate staffer Tara Reade said she was sexually assaulted by the Democratic presidential candidate in 1993.

Last Friday, Biden responded, denying her account in a Medium post and during an appearance on MSNBC.

While weighing coming forward with her claims, The Intercept reported Reade approached the Time’s Up organization for support. Founded following the onslaught of allegations against Harvey Weinstein, Time’s Up pledges to address “systemic inequality and injustice in the workplace.” That includes providing legal assistance through a defense fund administered by the National Women’s Law Center.

According to The Intercept, after encouraging conversations between Reade and Time’s Up, Reade was told the organization would not represent her, because it could lose its non-profit status by pursuing a claim against a candidate for federal office.

Time’s Up has since released a statement on Reade’s allegations, saying, in part, “We call for complete transparency into this claim and the multiple claims against President Donald Trump.”

Now, here’s where that PR firm comes in: the Time’s Up Legal Defense Fund was co-founded by Hilary Rosen, the Vice-Chair of public affairs agency SKDKnickerbocker. The agency itself also works on behalf of Time’s Up—as well as for the Biden campaign.

Her role, per the New York Times, was “elevated” earlier this year to essentially having “effective control of the campaign.” The Biden campaign did not immediately respond to the Daily Dot’s request to clarify her title and responsibilities.

However, SKDKnickerbocker has previously acknowledged Dunn’s dual role with the PR firm and the campaign.

And that’s about where the facts end and the Twitter theories take off, becoming a thorny mix of accusations and rampant speculation.

The theory alleges, in some way, that the three entities conspired to keep the Reade accusation under wraps. While there’s no proof of that, the fact there are so many connected figures makes some put on a tin foil hat.

In particular, users on the platform have taken to tracing the phrase, “I see you” back to the PR firm, noting the prevalence of the phrase in response to the Biden allegations, as well as this response from SKDKnickerbocker to an article written about The Wing, another one of their clients.

It’s important to note there’s no evidence beyond similar language to back up any theory. The New York Times reports that Dunn “has never worked with the [Time’s Up] fund and her firm was not told of Ms. Reade’s request.”

The phrasing was first flagged by podcaster Molly Lambert, who elaborated on the shared language in a Twitter thread.

“[The] same language about feeling “seen” and (shudder) “held” (so Midsommar!) appeared in Audrey Gelman’s statement about laying people off from The Wing … Biden and The Wing are both repped by nightmarish consulting firm SKDKnickerbocker! clearly “I see you” is the old SKDK special for when you want to say something but mean nothing,” Lambert wrote.

Even Alyssa Milano got roped into the accusations of some sort of coordination. Milano’s support of both Me Too and of Biden had put her in the crosshairs of a liberal sect of Twitter, given that she herself struggled to address the Reade story.

A potential running mate of Biden, Stacey Abrams, was also considered “in” on it.

Biden also got mocked for it earlier when his leading opponent, Sen. Bernie Sanders (I-Vt.) resigned.

While there’s no conspiracy to be seen in a PR firm copy-and-pasting a phrase for a variety of clients, and no proof of coordination on the matter, the repetition of it is revealing.

The constant use of “I see you,” according to its critics, is workshopped language design to project empathy. But in doing so, what it really reveals is a startling lack of it from both the Biden campaign and its surrogates, who are choosing to engage in the matter in the most corporate-speak way to swiftly past the story. What they’re really saying with “I see you” is “we’d rather ignore this.”

SKDKnickerbocker did not immediately respond to The Daily Dot’s request for comment on this story.