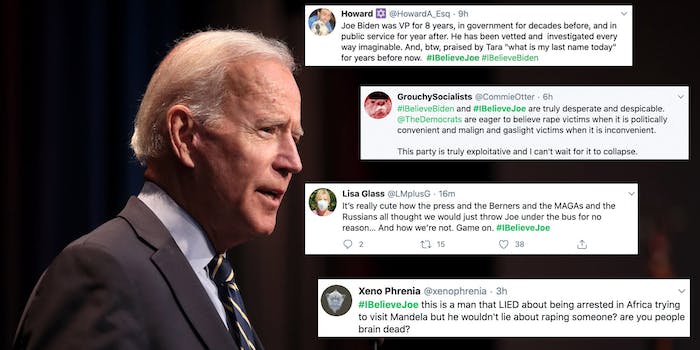 But not everyone using the hashtag was defending the former vice president.

The hashtags #IbelieveBiden and #IbelieveJoe trended on Twitter Friday as sexual assault allegations against the former vice president continued to garner widespread attention.

Biden, who publicly responded to the claims for the first time today, denied engaging in misconduct back in 1993 with a staffer who has repeatedly said otherwise.

“No, it is not true, I’m saying unequivocally it never, never happened,” Biden said on MSNBC. “And it didn’t. It never happened.”

The former staffer, Tara Reade, has accused the politician of inappropriately touching her while she worked in his Senate office 27 years ago.

Supporters of the Democratic presidential candidate opted to defend Biden and his denial by using the two hashtags on Twitter.

“Joe Biden was VP for 8 years, in government for decades before, and in public service for year after,” user @HowardA_Esq argued. “He has been vetted and investigated every way imaginable. And, btw, praised by Tara ‘what is my last name today’ for years before now.”

But the trending topic did not sit well with everyone. Many felt the hashtag, seemingly a play on the term “Believe women” coined by the #MeToo movement, trivialized the suffering of sexual assault survivors.

“The #IBelieveBiden tag is a gut punch to anyone who has suffered sexual assault and thought American liberals would defend them in trying to hold powerful people accountable for their actions,” @coherentstates said. “It hurts. It’s MAGA for libs.”

Conservatives likewise joined in on the hashtag, pointing to the case of Supreme Court Justice Brett Kavanaugh, who was similarly accused of sexual assault, as evidence of a double standard.

The subject also led many to highlight the numerous sexual assault allegations made against President Donald Trump.

But a significant number of users, convinced that the controversy has become completely politicized, argued that the incident was only evidence of hypocrisy from both sides of the aisle.

“Can everyone in the #IBelieveBiden tag just admit you don’t care about sexual assault allegations unless it can harm you politically,” @RinToesucker said. “You all believed the Kavanaugh allegations as gospel as soon as they came out but as soon as someone accused Biden you smear the accuser.”

In an effort to bolster his statement, Biden agreed that the National Archives should make public any complaint that was filed while he was in office.

Meanwhile, a former co-worker of Reade’s recently came forward and stated that Reade had told her about being sexually assaulted by an ex-boss in the nation’s capital. An old neighbor of Reade’s also claimed to have been told about the alleged sexual assault during the mid-1990s.

Although it remains uncertain what other evidence, if any, will emerge in the coming weeks, the allegation will undoubtedly remain front-and-center as the 2020 election draws near.