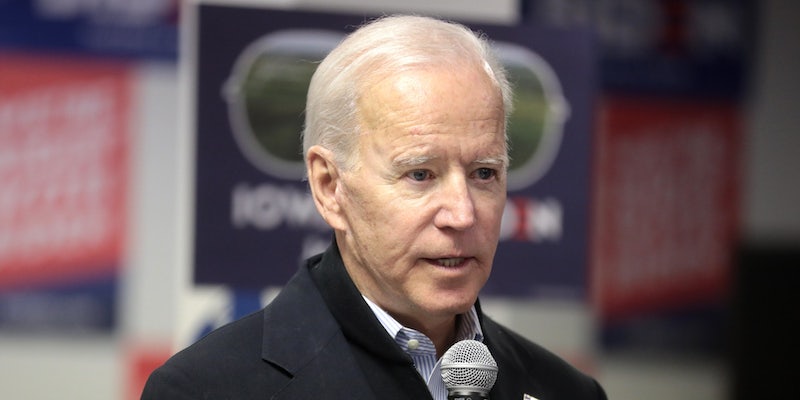 Despite the allegations online, no publicly available evidence appears to back up the claim.

President Joe Biden is being criticized online for allegedly canceling Operation Talon, an effort from Immigration and Customs Enforcement (ICE) to deport convicted sex offenders in the country illegally.

The operation, which was put together in the final weeks of President Donald Trump’s administration, was reportedly shelved in late January but became a topic of debate this week after the issue was referenced by Rep. Paul Gosar (R-Ariz.).

In a letter to Biden last Thursday, 18 state attorney generals pushed back on the alleged policy reversal by arguing that it creates “a perverse incentive for foreign sexual predators to seek to enter the United States illegally and assault more victims.”

“We urge you to immediately reinstate Operation Talon, adopt an aggressive enforcement policy against illegal aliens convicted of sex crimes, and send a message to sexual predators that they are not welcome in the United States of America,” the letter states.

But did Biden actually cancel Operation Talon? The letter goes on to note that ICE may have canceled the plan itself in response to a Jan. 20 memo sent by Biden to the Department of Homeland Security which called for “a stay on nearly all interior immigration enforcement.”

A Washington Post report also quoted a senior ICE official who said the Biden administration had nothing to do with the decision to cancel Operation Talon.

But the alleged cancelation has since become a trending topic on Twitter, where conservatives have accused the president of protecting sexual predators. Far-right conspiracy theorists also latched on to the narrative, suggesting that Biden was nefariously attempting to dismantle efforts to tackle human trafficking, red meat for QAnon believers and far right conspiracy theorists.

Supporters of Biden, however, claimed that Operation Talon was merely paused by ICE officials “until they see how it comports with new guidance from the Biden administration.”

In a statement to the Daily Dot, an ICE spokesperson stated that it was unable to comment on the allegations due to “operational security.”

“Due to operational security, we are not able to confirm or discuss future operations until they are complete,” the spokesperson said.

While scarce on details, the statement from ICE does appear to refer to Operation Talon as a “future operation” yet to be completed, not as one that was canceled.

ICE also referenced the Daily Dot to a recent press release outlining its “temporary guidelines” that will remain in effect until the newly-appointed Secretary of Homeland Security, Alejandro Mayorkas, issues new enforcement guidelines for the agency.

The Daily Dot reached out to both Gosar as well as Missouri Attorney General Eric Schmitt, who signed the letter to Biden, to inquire about their allegations regarding Operation Talon but did not receive any replies by press time.

Even though valid questions on the status of Operation Talon remain unanswered, the facts of the matter will likely do little to alter the narrative being cultivated online.