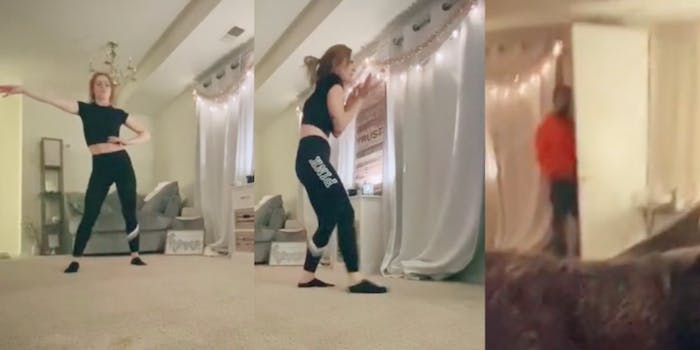 The TikToker has since been released from her lease and is searching for safe, affordable housing.

Immigration and Customs Enforcement (ICE) detained an intruder caught busting into a woman’s home while she was recording a TikTok video of herself dancing, TMZ reports.

The suspect—identified as 36-year-old Angel Moises Rodriguez-Gomez—is charged with two counts of burglary, second-degree assault, and stalking and malicious destruction of property.

He bailed out of jail shortly after his arrest but was back in ICE custody on Thursday, TMZ reports. ICE said Rodriguez-Gomez is an unlawfully present Mexican national, and officers served him with a notice to appear for immigration proceedings.

In the now-viral video of the break-in, users see Hannah Viverette, who lives in Maryland, in the middle of recording a video dancing when Rodriguez-Gomez climbs into her second-floor balcony and opens her apartment door.

Viverette repeatedly asks, “Who are you?” and says, “Please get out!” She then grabs her phone, runs to the front door, and turns the camera toward her balcony. The man begins to retreat, shuts the door, and Viverette is let into a neighbor’s apartment, where she said she called 911.

Viverette said Rodriguez-Gomez admitted to climbing up her balcony. He told authorities he was invited up.

It’s unclear if Rodriguez-Gomez is getting deported, TMZ reports. An attorney for Viverette said, “Hannah is extremely relieved to know that Angel [has] been detained and that she has been released from her lease. She continues to search for safe, affordable housing and looks forward to continuing therapy and beginning self-defense class.”