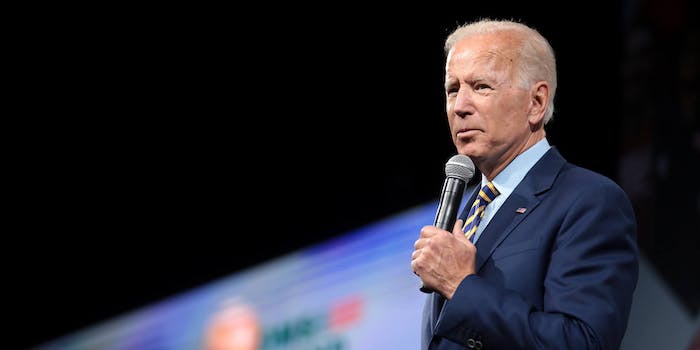 The statement from the former vice president is the first substantial response to the allegations.

Former Vice President Joe Biden denied the sexual assault allegation against him by a former staffer, saying that it “never happened.”

Biden released a statement this morning, his first in-depth response after Tara Reade, a former staffer, came forward about an alleged assault in 1993. His campaign had previously denied Reade’s account.

Reade worked in Biden’s Senate office and recent reports have lent support to her account.

“I want to address allegations by a former staffer that I engaged in misconduct 27 years ago. They aren’t true. This never happened,” Biden said in a statement posted on Medium. “While the details of these allegations of sexual harassment and sexual assault are complicated, two things are not complicated. One is that women deserve to be treated with dignity and respect, and when they step forward they should be heard, not silenced. The second is that their stories should be subject to appropriate inquiry and scrutiny.”

The former vice president also said the National Archives should make available any complaint that was filed, adding: “If there was ever any such complaint, the record will be there.”

Biden’s statement came out just before he appeared on MSNBC’s Morning Joe on Friday.

During the interview he also denied the allegations.

“No, it is not true, I’m saying unequivocally it never, never happened. And it didn’t. It never happened,” Biden told host Mika Brzezinski.

Earlier this week a report from Business Insider detailed how a neighbor of Reade’s said she was told of the alleged assault in the mid-1990s. In the same report, a former co-worker of Reade’s at a California state senator’s office also came forward and said Reade complained that a former boss in Washington, D.C. sexually harassed her.