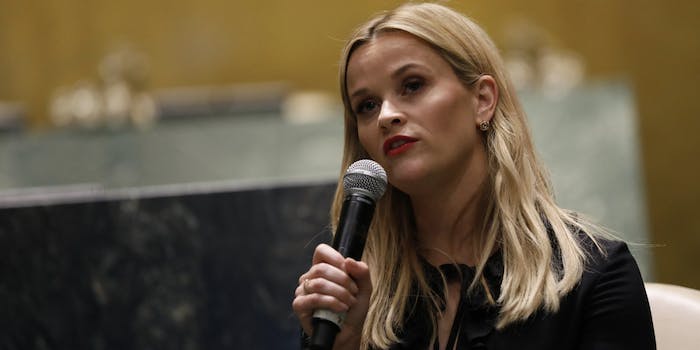 Reese Witherspoon says the response has been 'incredible.'

At an event honoring International Women’s Day at the U.N. headquarters Thursday, Reese Witherspoon revealed that the Time’s Up legal defense fund is already making an impact.

Witherspoon, along with a collective of prominent Hollywood women, helped spearhead the organization in early 2018 as a response to the #MeToo movement and Weinstein allegations. Its mission is to address “systemic inequality and injustice in the workplace” for women in all industries, and according to Witherspoon, the organization has already helped more than 1,500 individuals bring harassment suits against their employers.

In its less than three months of existence, and with 200 volunteer lawyers, the fund has raised more than $20 million to help finance these lawsuits. Some of the money came directly from the salaries of stars like Mark Wahlberg and Timothee Chalamet, who wanted to distance themselves from problematic projects they’d recently worked on. And while Witherspoon says the initial response to Time’s Up has been “incredible,” the rate of people reaching out for aid also shows “how many more people are going to need these services” as the work continues.

Thanks to @DanaiGurira & @RWitherspoon for your commitment to women's rights & inspiring women to speak up. #TimeIsNow. Great to have you with us @UN for the #InternationalWomensDay celebration. pic.twitter.com/aWvoqth7Xb

Witherspoon went on to say that women deserve 50 percent of the representation in Hollywood, and 50 percent of the salaries. She says women “will no longer continue to do work without being paid properly for it.”