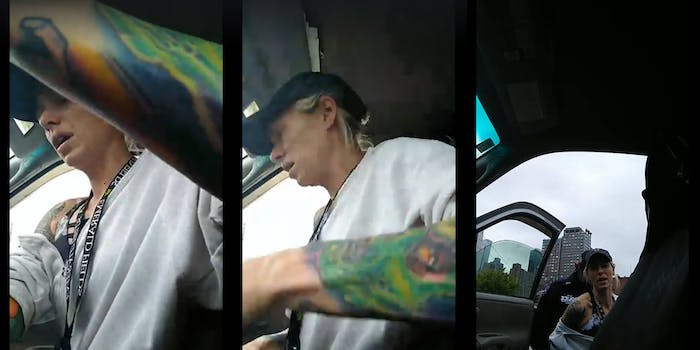 Manhattan police on Wednesday arrested an Illinois woman with a car full of knives after she made threatening statements about Joe Biden and Hillary Clinton on Facebook, the New York Daily News reports.

Jessica Prim, 37, was arrested near the USS Intrepid in Manhattan. She streamed her arrest on Facebook Live, during which she told police, “I think I’m the coronavirus.”

After speaking to Prim, the New York Police Department learned the Secret Service had been looking for her because of recent Facebook posts she made. On Wednesday, Prim wrote, “Hillary Clinton and her assistant, Joe Biden and Tony podesta need to be taken out in the name of Babylon! I can’t be set free without them gone. Wake me up!!!!!”

Prim told police that prior to her arrest, she had been watching the Fall of Cabal—a 10-part video series alleging that liberals and celebrities are part of a Satanic global pedophilia and child-eating ring—on YouTube.

“I was sitting there—I made costumes—I was going down for my costumes, I was watching the press conferences with Donald Trump on TV,” she continued. “This has been going on for a couple weeks. I felt like I had to come here to this ship because I needed help.”

Prim, who performs as a feature entertainer under the name Nikita Steele, has insisted numerous times on Facebook that she was never a Prim, and was forced to change her name and Social Security number when she was adopted as a child. Elsewhere on her timeline, she recently shared links to YouTube videos about Denver airport conspiracy theories and UFO and alien myths.

Police took Prim to Mount Sinai West and charged her with marijuana possession and 18 counts of criminal possession for knives in her car.