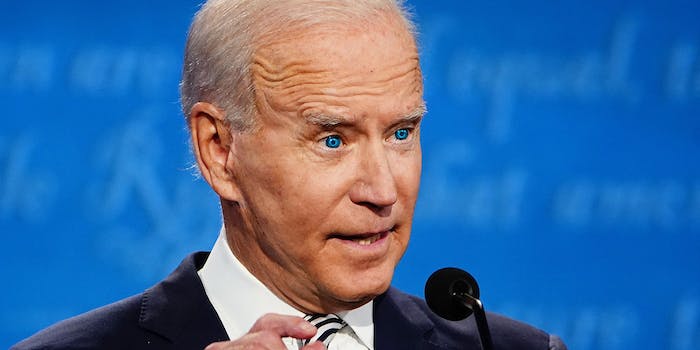 The false claim was just one of countless viral conspiracies about Biden's debate performance.

Conspiracy theorists are claiming that former Vice President Joe Biden was wearing a high-tech contact lens on Tuesday that fed him answers throughout the first presidential debate.

The outlandish claim gained prominence on Twitter on Wednesday morning after one user suggested that Biden’s eyes had looked suspicious while debating President Donald Trump.

The user, whose account has since been suspended, released a video in which he alleged that Biden’s eyes had mysteriously changed color.

The eye color change, according to the account, proved that Biden had been wearing an “Eye Contact Lens Video Display System.”

“Biden was wearing an Eye Contact Lens Video Display System at the debate,” @paulmuaddib61 said. “His eyes are normally blue, but they WERE NOT last night. I slowed it down so you can see the eyes focusing in different directions.”

The tweet quickly spread among followers of the QAnon conspiracy, who suggested that Biden must have received outside help during the debate.

The accounts also began sharing video of an augmented reality-based contact lens, suggesting that the mere existence of such technology—which is still very much in development—proved that Biden had acted nefariously.

“DNC used this tech to put a teleprompter in Biden’s eye,” @SonBegotten said.

But that was only just one of the conspiracies surrounding Biden’s debate performance.

On Wednesday morning, numerous accounts also alleged that Biden had worn a secret microphone near his wrist. Others suggested that the object was actually an IV used to pump drugs into the former vice president to keep him lucid throughout the evening.

In reality, Biden was wearing rosary beads that have been on his wrist for several years in remembrance of his son Beau, who died of cancer in 2015.

Conspiracy theorists also failed to explain how a microphone in Biden’s sleeve would have helped him during the debate.

Another viral conspiracy regarding Biden alleged that the Democratic candidate had worn a wire. Still images and video purporting to show the wire were spread online by prominent users including Hollywood actor and conservative conspiracy theorist James Woods.

Once again, video from the evening shows that the alleged wire is nothing more than a crease in Biden’s shirt.

The false conspiracies came after an initial rumor on Tuesday alleged that Biden had agreed and later backed out of a promise to let a third party check him for a hidden ear piece prior to the debate.

Despite the Biden campaign immediately refuting the allegation, the unsubstantiated claim was shared by conservatives all across social media. The president even ran ads on Facebook that edited a photo of Biden with a headphone in.

In the end, Biden never wore an earpiece, a wire, an IV, a microphone, or a digital contact lens.