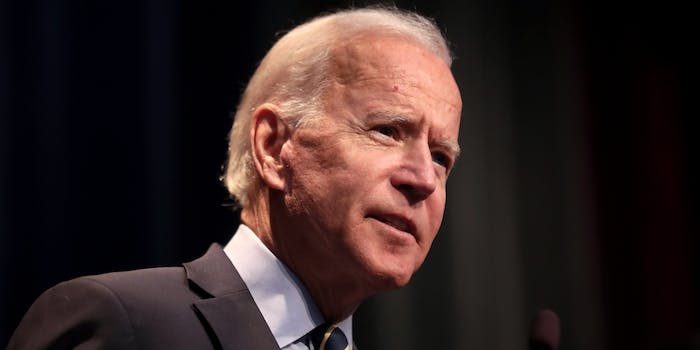 Conservatives are convinced that former Vice President Joe Biden will be wearing a secret earpiece during Tuesday evening’s presidential debate.

The earpiece fiasco began when Fox News discussed that President Donald Trump’s reelection campaign had requested that a third party be allowed to inspect the ears of both candidates for electronic devices.

That news was also reported by the New York Post‘s Ebony Brown.

The Trump campaign also claimed that Biden had requested two 30-minute breaks during the 90-minute debate.

The Biden campaign, according to the report, initially agreed to the inspection before backing out on Tuesday.

“Of course he’s not wearing an earpiece and we never asked for breaks,” Bedingfield said.

When asked if Biden had ever agreed to an inspection, Symone D. Sanders, a senior adviser for the campaign, called the claim “ridiculous.”

“This is so ridiculous,” Sanders said. “This is absolutely ridiculous.”

Despite little concrete evidence on the allegations being available, theories have already begun to circulate online about a Biden earpiece.

Alex Marlow, editor-in-chief for the far-right outlet Breitbart News, asserted that the report proved a nefarious conspiracy on behalf of Biden.

“Is there a single possible non-nefarious reason that Biden would agree and then back out of an ear piece inspection?” Marlow asked.

The theory that Biden is alleged to have masterminded is that he agreed not to wear an earpiece, then changed his mind, after having already agreeing not to, thus needing to back out, which raises tremendous suspicions focused right on the debate fraud he’s just about to do.

DeAnna Lorraine, a correspondent for the conservative outlet Newsmax, argued that Trump should carry out the inspection himself.

“Trump should just walk over and check Biden’s ears himself,” she said. “Just stick his finger right in that old ear and pull that ear piece out. Then walk off the stage.”

Conspiracy theorists have also begun circulating pictures that they claim proves that Biden has worn a secret, flesh-colored earpiece before.

Others have even called for the Trump campaign to deploy signal jammers to disable the alleged hearing device.

“Why would the Biden campaign say no to checking both candidates for hidden ear pieces?” Adams said. “Can’t spare five seconds to clear up a conspiracy theory?”

Regardless of what’s true, the narrative surrounding a secret Biden earpiece has already been set.

Pictures of Biden’s ears will undoubtedly flood social media throughout the debate, convincing some that an earpiece can be seen.

Whether the Trump campaign has fabricated the claims entirely in order to create controversy before the debate is unknown.