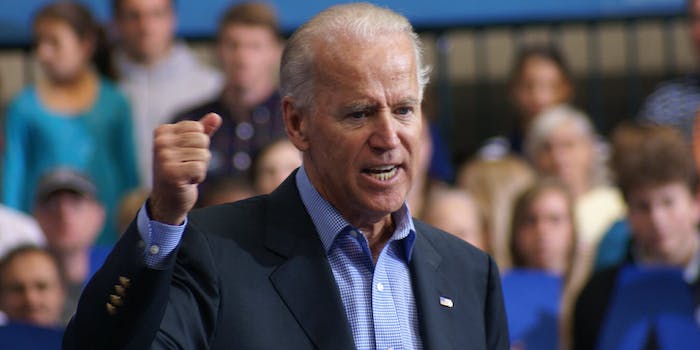 Joe Biden on Hillary Clinton: ‘I never thought she was a great candidate’

Biden also stoked the fires of his own possible 2020 run.

Former Vice President Joe Biden weighed in on the candidacy of Hillary Clinton on Thursday night, saying he didn’t think she was a “great candidate.”

A rumored candidate for the Democrats in 2020 himself, Biden made the frank remarks about Clinton’s 2016 campaign at the SALT hedge fund conference in Las Vegas.

Biden also didn’t seem to rule out his own run for president in 2020.

When asked if he would run, he said “Could I? Yes. Would I? Probably not,” CNN reported.

Biden continued to open the door further, adding that if his family is stable following the death of his son Beau to brain cancer by the time election season comes around, he may look harder at running.

“I may very well do it,” he said. “At this point, no one in my family or I have made the judgment to run.”

Recent polls have indicated the Biden would stack up well against President Donald Trump in a hypothetical 2020 election.

Public Policy Polling found that Trump would lose Biden by a margin of 54 percent to 40 percent.

Biden’s 2020 comments on Thursday were different than ones he made several weeks ago where he told a crowd at the annual New Hampshire Democratic Party dinner: “Guys, I’m not running.”

People on social media had mixed reactions to Biden’s comments about Clinton.

No thanks. #Biden right that #Clinton was not best candidate but that goes for him now too. Let a younger generation into leadership. https://t.co/6KK26obrzq

Hindsight isn't necessarily 20/20. Biden knew in 2015 he couldn't beat Clinton for nomination and he was right.