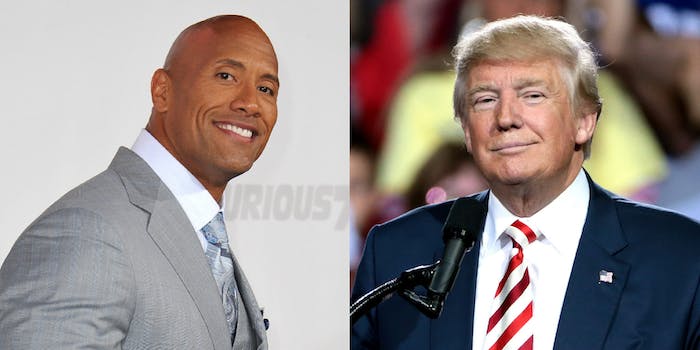 The Rock would beat Trump in 2020 election, poll finds

There was no word on whether Johnson would use the slogan 'Make America Furious Again.'

Dwayne “the Rock” Johnson would beat President Donald Trump in the 2020 election if the vote took place today, a new poll released on Tuesday has found.

While Public Policy Polling found that Trump would not fare well against many Democratic lawmakers in hypothetical matchups, voters polled seemed to indicate he would also lose Johnson, another celebrity with zero prior political experience.

The polling organization found that Johnson would beat trump 42 percent to 37 percent in a hypothetical presidential election. Public Policy Polling said Johnson would pull in 15 percent of people who supported Trump in November.

It appears Johnson, an actor and former professional wrestler, has broad support from both sides of the isle, Public Policy Polling found: Both Democrats and Republicans see him positively—a stark contrast to the latest approval numbers for Trump, which shows 54 percent of voters disapproving of his job so far as president.

There was no word on whether Johnson would use the slogan “Make America Furious Again.”

Johnson said recently that running for president in 2020 is “a real possibility.”

As for other possible 2020 opponents, Trump doesn’t fare well against them either, according to the poll.

The organization also found that Republicans are facing backlash over the House’s recently passed bill to repeal and replace the Affordable Care Act, and Democratic voters continue to be more excited than Republicans about voting in the 2018 midterm elections.

Public Policy Polling surveyed 692 voters between May 12 and May 14 over the phone and on the internet, they said. The margins of error for the polls are +/- 3.7 percent.

Of course, the internet had some feelings about the idea of a Johnson presidency.

The Rock for President. Or simply a rock or any other inanimate object. Anything. Please.

I'd vote for @TheRock for President. #RockTheVote #RockTheCampaign

You can read the rest of Public Policy Polling’s findings here.