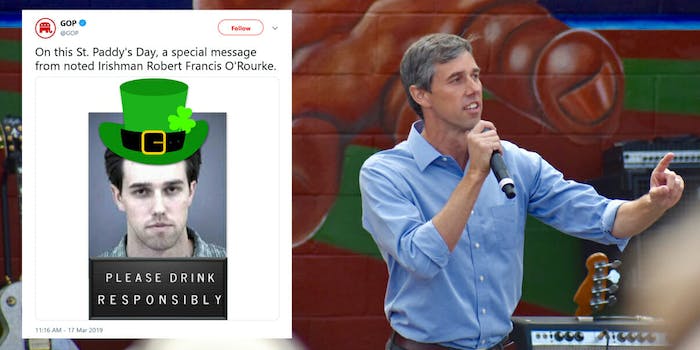 Even Republicans are angry with the GOP’s anti-Beto tweet

The tweet was criticized by people across the political spectrum.

The @GOP account posted a photo of O’Rourke’s mugshot with a superimposed leprechaun hat on his head. Underneath it, it reads “please drink responsibly.”

“On this St. Paddy’s Day, a special message from noted Irishman Robert Francis O’Rourke,” the account wrote above the image on Sunday.

The tweet also knocked O’Rourke’s use of “Beto” as a nickname, something he’s addressed in the past and has been an attack for Republicans since the midterm elections.

The post quickly drew backlash, and as of Monday morning it had been ratioed, with 31,000 people responding to it compared to just 11,000 retweets and 27,000 likes.

Rep. Justin Amash (R-Mich.) quote-retweeted it asking for the party to “be better.”

John Weaver, a Republican strategist who worked with former Ohio Gov. John Kasich in the 2016 election, called the tweet “vile.”

The Beto @GOP tweet was also criticized by a number of people for stereotyping.

Let me get this straight: the @GOP is mocking Beto O'Rourke by deploying vicious anti-Irish stereotypes that have historically been used to marginalize Irish immigrants and citizens while ignoring that Bush, Cheney, and Matt Gaetz have four DUIs between them. Classy. https://t.co/swSQDGbvsZ

On #StPatricksDay we learn, again, that the prejudice, ethnic discrimination and bigotry of @GOP has no boundaries. https://t.co/PnKL56vX7m

On a day we should be promoting the positive aspects of Irish culture, a mainstream political party seeks to use an outdated and racist stereotype in a political attack on @BetoORourke. If this was a religious reference we would see an immediate retraction and resignations. https://t.co/flTpBX0HI3

O’Rourke responded to a question about the tweet on Sunday.

“People want us to focus on the big picture, on our goals,” he said. “They want us to be defined not by this pettiness or the personal attacks we see in ones like the ad that you just described. They want us to be defined by our ambitions, our aspirations. The work that we’re willing to do to pull this very deeply divided country together. We cannot meet this challenge with more partisanship, more pettiness, more meanness, more personal and partisan attacks. We have to meet this moment by coming together.”

O’Rourke’s mugshot has been a frequent go-to for Republican Twitter accounts. During O’Rourke’s ultimately unsuccessful campaign to unseat Sen. Ted Cruz (R-Tx.) during the 2018 midterms, the Texas GOP account tweeted out the mugshot, only to learn that a lot of people found him quite attractive.