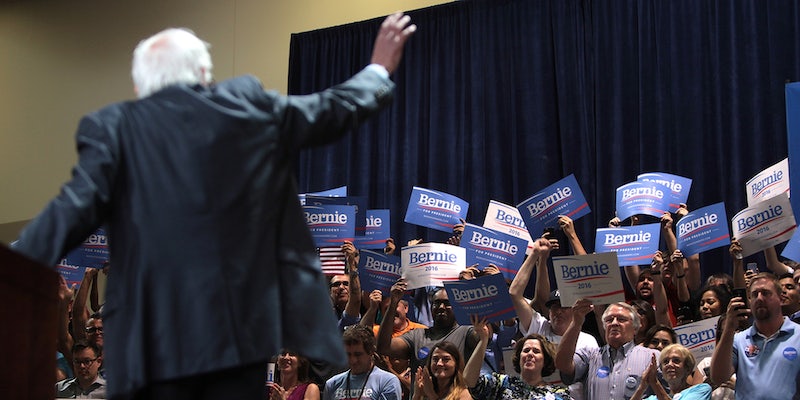 He's pretty quick for a senator.

A man fainted Wednesday afternoon on stage while Sen. Bernie Sanders (I-Vt.) was giving a speech in New Hampshire ahead of the state’s primary election.

The presidential candidate gasped, “Oh, my god,” after the loud noise forced him to flinch. But what really caught the eye of his livestream viewers was Sanders’ quick response.

Here's a vine of @berniesanders running to the side of the man who fainted at his presser: https://t.co/muzphoKLAQ

After realizing what happened, and as others stood still around him, Sanders dashed to the side of the man, who was being assisted by three people moments after the fall.

It was not immediately clear who the man was, why he collapsed, or if he sustained any injuries because of it. After about 30 seconds on the ground, he got up with a little help before being led out of the room. Standing nearby, Sanders asked for a physician.

Moments before the fall, Sanders was discussing his support for gun safety legislation. “I may well have lost an election in 1988 running for Congress because I said military-type assault weapons should not be sold in the United States,” he said. “The gun people said, ‘you can vote for anybody, don’t vote for Bernie Sanders.’”

The fall happens one minute into the livestream.

With the New Hampshire primary quickly approaching next Tuesday, Republican and Democratic candidates are canvassing the state top to bottom, each trying to distinguish themselves from their opponents.

Wednesday afternoon, that crusade seeped online, where Sanders and Clinton exchanged blows via Twitter while challenging one another’s progressivism.

Click here to find out how to watch the last-minute Democratic debate in New Hampshire on Thursday night.