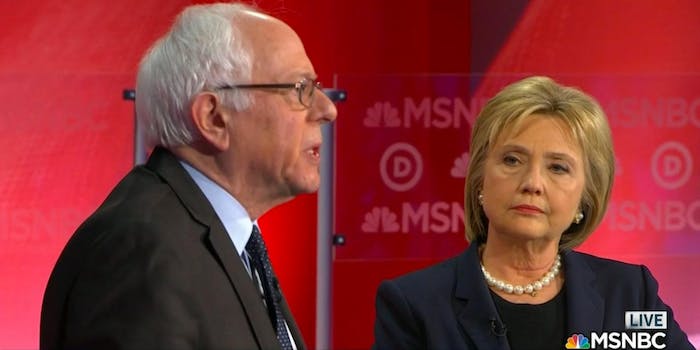 Who won the first Bernie Sanders vs. Hillary Clinton debate?

Bernie Sanders had a huge moment.

Hillary Clinton may have won the Iowa caucus by a hair, but Bernie Sanders just eked out a win of his own.

During Thursday night’s 2016 Democratic debate in New Hampshire, Sanders scored top marks on both Twitter and Google, which provide real-time data during the debates.

On Google, Sanders, an independent senator from Vermont, remained the most searched candidate in 45 out of 50 states at the end of the debate.

At the end of the #DemDebate, @BernieSanders was top searched candidatehttps://t.co/0KY1KNFS1O pic.twitter.com/KqcgAHHHLZ

His lead was not consistent, however, with former Secretary of State Clinton repeatedly piquing the interest of American Internet users throughout the head-to-head showdown.

How @BernieSanders & @HillaryClinton slugged it out tonight in Google data in #NewHampshirehttps://t.co/RbP1mzSuuF pic.twitter.com/w4aRDF0Mgr

Sanders also had the most tweeted moment of the debate, when he dubbed Wall Street’s business practices “fraud.”

“In a sense, in my view, the business model of Wall Street is fraud,” Sanders said. “It’s fraud. I believe that corruption is rampant, and the fact that major bank after major bank has reached multi-billion dollar settlements with the United States government when we have a weak regulator system tells me that not only did we have to bail them out once, if we don’t start breaking them up, we’re going to have to bail them out again, and I do not want to see that happen.”

Clinton interjected that “no one wants to see that happen.” She added, in reference to the 2008 financial crisis, that “I care deeply about this because, just like you, I have met so many people who had their life savings wiped out, who lost their homes, who are barely back with their heads above water.”

“This was a disaster for our country,” Clinton said, “and we can never let that happen again. We have no disagreement about this.”

While that moment may have scored Sanders major points among his supporters, Clinton remained the most talked-about candidate of the debate, according to Twitter.

The biggest winner of the night, however, may have been MSNBC host and moderator Rachel Maddow, who sparked Americans’ curiosity to new heights.

The next Democratic presidential debate will take place on Thursday, Feb. 11, on PBS. The 2016 Republican presidential candidates will take the stage on Saturday, Feb. 6, in New Hampshire, where voters will cast their primary ballots on Tuesday, Feb. 9.