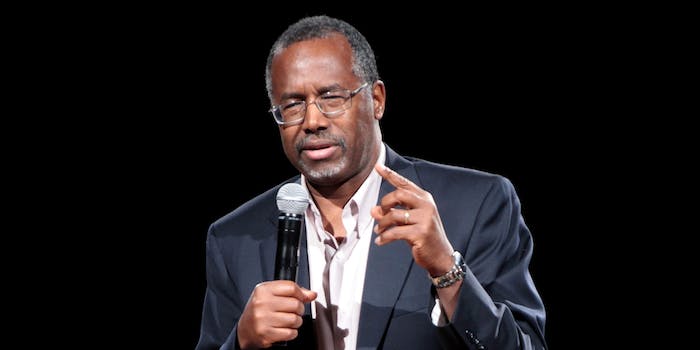 President-elect Donald Trump on Monday announced that he plans to appoint Dr. Ben Carson secretary of the Department of Housing and Urban Development (HUD).

Carson, Trump’s former Republican primary rival and one of his earliest high-profile supporters, grew up in poverty on the south side of Detroit before becoming a celebrated neurosurgeon and a star in conservative politics.

Carson, 65, became director of pediatric neurosurgery at Johns Hopkins University at age 33. He rose to prominence in conservative circles after criticizing President Barack Obama at the National Prayer Breakfast in 2013.

Like Trump, Carson has no experience in government. As HUD secretary, Carson will oversee a $47 billion budget used to elevate impoverished urban communities through rent vouchers for some 5 million low-income families and mortgage assistance for struggling homeowners, among other efforts.

Carson has criticized HUD’s work in the past. He once called a rule established under Obama known as “Affirmatively Furthering Fair Housing,” which mandates that communities assess patterns of economic and racial segregation and find ways to address them, as a “mandated social-engineering scheme.”

Despite certain criticisms, Carson has long championed the need for strong inner cities in the U.S. “I know that I grew up in the inner city,” Carson told Fox News last month. “And have spent a lot of time there. And have dealt with a lot of patients from that area. And recognize that we cannot have a strong nation if we have weak inner cities. And we have to get beyond the promises and start really doing something.”

Trump, who disparaged Carson during the primary campaign for his peculiar theories about Egyptian pyramids and claims that he once tried to stab a classmate, expressed full faith in Carson’s ability to enact his “urban renewal agenda.”

With Ben Carson wanting to hit his mother on head with a hammer, stab a friend and Pyramids built for grain storage – don't people get it?

“Ben Carson has a brilliant mind and is passionate about strengthening communities and families within those communities,” Trump said in a statement issued Monday morning. “We have talked at length about my urban renewal agenda and our message of economic revival, very much including our inner cities.

“Ben shares my optimism about the future of our country and is part of ensuring that this is a presidency representing all Americans,” he added. “He is a tough competitor and never gives up.”

Carson originally dismissed Trump’s offer to run HUD. “Dr. Carson feels he has no government experience; he’s never run a federal agency,” Armstrong Williams, a longtime friend of Carson, told the Hill in November. Carson said in a Nov. 21 Facebook post, “I have always made it clear that I preferred to work outside of the government as an advisor, but if called upon, I would serve inside of the government.”

The U.S. Senate will vote on Carson’s appointment next year, after Trump takes office on Jan. 20, 2017.