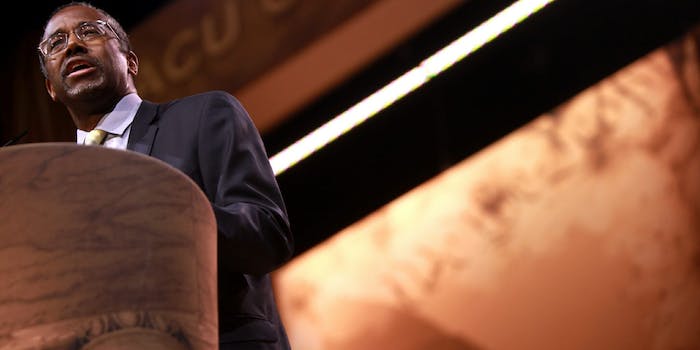 Did you know Carson's hands are gifted?

Before he began topping national polls and winning over voters in early primary states, Ben Carson was a stupendously skilled neurosurgeon. But you probably already knew that—it’s his defining trait as a candidate for the 2016 Republican presidential nomination.

That Carson, the former Director of Pediatric Neurosurgery at Johns Hopkins, doesn’t have direct political experience doesn’t seem to be relevant to Republican voters of 2015; polls show that he, along with former Hewlett-Packard CEO Carly Fiorina and real estate mogul Donald Trump—neither of whom have held office, either—are beating every experienced politician.

So it should come as no surprise that Gifted Hands, the 2009 direct-to-TNT, Cuba Gooding Jr. vehicle about the doctor’s life, isn’t really about politics at all. Sure, there’s Caron’s pull-yourself-up-from-your-bootstraps story of working hard at school in a single-parent home to rise to success that drives his conservative ethos, but that’s about it. Contrast that with Caron’s campaign website, where a casual observer might come across a petition to deny tax-exempt status to, as the site puts it, “a Muslim group.” Suffice to say, there’s nothing remotely that polarizing in this film.

For most of the movie, Carson’s biggest challenge is not devoting enough time to studying, which he overcomes by studying.

Maybe things would be different had it been released later than 2009: Carson only retired from surgery to focus on politics in 2013, and the movie’s based on his memoir, which was published back in 1992. But like Trump, whose decades of media appearances reveal a man who is similar to what he is today but whose politics are very different, Carson’s biopic is solely focused on telling the story of an inner-city African-American kid learning to be good at school, and then pulling off an extremely difficult surgery.

It’s not a good movie. It’s not bad-good, either, nor average but saved by really good acting, or by good set design, dialogue, scenery, or anything like that. It’s inspiring but bland, the way I imagine some critics describe Carson’s candidacy. But though it’s not currently available through most streaming services, you can find it online if you look hard enough (and if, for some reason, this review leaves wanting more Gifted Hands).

(Alternately, you could just watch this clip from Stuck On You, which also informs the viewer that Carson is a talented surgeon who focuses on conjoined twins, but much more quickly.)

Yes, that's Ben Carson as the surgeon who separates Matt Damon and Greg Kinnear in "Stuck on You." pic.twitter.com/IKhLGVJscH

The movie itself is awkwardly paced. It’s bookended by what is likely the great accomplishment of his career: the successful separation of the Rausch twins, a pair of 3-month-old German babies conjoined at the head. No one had successfully separated twins with their specific condition before. We see Carson agree to the surgery, unsure of how he’ll actually do it. Then he goes to his study and reads a lot.

Carson reading a lot is as big a theme as anything in Gifted Hands. The movie cuts from him in his studio to him as a child, where it spends about half of its runtime. Carson is the one black kid in his otherwise all-white class in Detroit. He and his classmates agree: he’s the dumb kid, and his classmates make fun of him for being stupid. Race is never explicitly mentioned until much later. Eventually, it turns out, he just really needs glasses. His mom makes him study a lot, and he does, and his grades improve. Then she makes him study more, and his grades become excellent. Then she makes him study some more, and he wins a school award. Throughout it all, Carson, who is a devout Christian, prays. Later on, as an undergrad at Yale who fears he’s going to flunk out, he overcomes his dreaded chemistry exam by studying really hard and praying some more.

That’s basically the message of the film: Work hard and pray, and you’ll be successful.

It is an interesting theme, given that the film is based on Carson’s own memoir, that the film stresses Carson’s knowledge and ability comes from really busting his butt in the library and his faith, rather than anything intuitive to him as a person. He’s kind of the opposite of Donald Trump—soft spoken instead of brash, from a poor family rather than a rich one, and extremely humble about his innate abilities, rather than, you know, Trump.

The turning point of his adolescence comes when his temper gets so out of control, he tries to stab a friend—unsuccessfully, thankfully—and prays to take the outburst back. It’s presented as a singular incident. But it’s a little more unnerving in recent light, in which Carson, insisting to Meet the Press‘s Chuck Todd that he is indeed full of energy, remarked that “as a teenager, I would go after people with rocks, and bricks, and baseball bats, and hammers.”

Explicit race-related discrimination only comes up a handful of times: One elementary school teacher embarrasses him and his family in front of the school, and a senior surgeon with a Southern accent harasses him out of nowhere, straining his temper. But for most of the movie, his biggest challenge is not devoting enough time to studying, which he overcomes by studying.

At the end, of course, Carson directs an enormous medical team for 22 hours to finally pull of the incredible surgery, and he does it with only seconds to spare. The German parents cry tears of joy. The end.