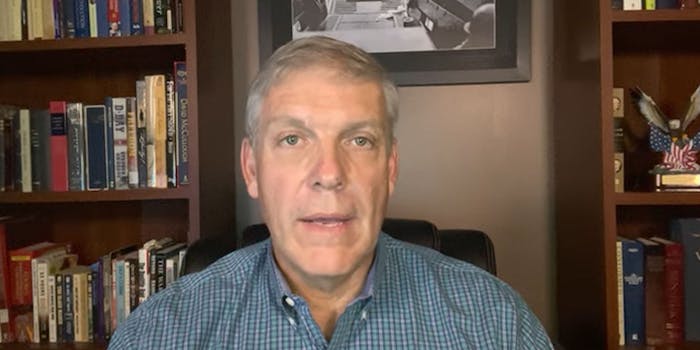 Maria Zack has long ties to Loudermilk, and gave him documents about 'Italygate' on Jan. 6.

A far-right operative with close ties to Rep. Barry Loudermilk (R-Ga.) said in an interview on Jan. 6, 2021 that she had just then delivered a conspiratorial-laden affidavit to him that showed massive election fraud, which he was supposed to use that evening to reverse Georgia’s vote for President Joe Biden.

Lobbyist Maria Strollo Zack has long been one of the primary individuals pushing Italygate, a false conspiracy theory stating Italian satellites interfered with voting machines to steal the 2020 election from then-president Donald Trump.

She appears to have ties to Loudermilk since at least 2006, according to records reviewed by the Daily Dot.

Zack said she delivered the affidavit, in which an engineer at an Italian company attested that he witnessed vote flipping, to Loudermilk on Jan. 6, 2021 at 1:12pm.

The interview comes from the online streaming show “America, Can We Talk” with Debbie Georgatos. The discussion of Loudermilk begins at the 8:00 mark.

Though the Daily Dot has not independently verified the exchange, lobbying records obtained from Georgia’s Campaign Finance Commission show that Zack has frequently met with Loudermilk before.

In the interview, the host Georgatos says that Zack was in Washington and delivered the affidavit to Congress, implying it was in person. But it’s not clear if Zack met in person with Loudermilk.

But the revelation that a right-wing lobbyist delivered an affidavit around one of the 2020 election’s most bizarre conspiracies, just moments before the insurrection unfolded that day, adds to the intrigue surrounding Loudermilk and the Jan. 6 Capitol riot.

The Daily Dot exclusively reported last week that during the insurrection—Loudermilk spoke to WBHF radio and admitted that he’d met, the day before, with “about a dozen people” planning to attend the Jan. 6 protest.

It differs from three other accounts of that day. Loudermilk previously denied he gave Capitol tours the day before the riot. Then when the Jan. 6 Committee asked to speak with him about giving tours, he shifted to say he’d met with a constituent family. He later updated that to say the family brought guests with them.

In the interview about the Italygate affidavit, Zack says she also delivered it to the staff of Rep. Devin Nunes (R-Calif.) who has since left to run Trump’s social media service, and Rep. Louie Gohmert (R-Texas), who worked with Ali Alexander, one of the Jan. 6 protest organizers.

Zack said she met in person with Gohmert’s office to keep them posted on the delivery of her memo.

During Zack’s interview, on the far-right online broadcast, “America, Can We Talk?”, Zack said that “[she] drafted and submitted to Congress at 1:12 this afternoon” an affidavit to, “a very good man that I’ve known for a couple decades now, Congressman Barry Loudermilk … a dear friend.”

Zack called her information on Italygate the “who, where, and how,” explaining it was the smoking gun “admitting to the theft of the election.”

It’s unclear if the interview was pre-taped and planned to run later. Zack went on to say that “At 5:00pm today, [Loudermilk] in just a half an hour, will be conducting the Georgia investigation on the house floor.”

If the interview was live, then, it’s likely the certification of the 2020 election would have already been delayed.

In Loudermilk’s interview, also recorded on Jan. 6, he said, “I was not on the floor at the time … I determined I was just going to wait until Georgia’s debate, which would have been later in the evening, and just work in my office until that time.”

Georgia was one of several states, including Pennslyvania, that pro-Trump congressmen were attempting to prevent having results certified, to keep Biden from being officially declared the winner of the 2020 election.

The Washington Post reported that Maria Zack’s 501(c)(4), Nations In Action worked with the Institute for Good Governance on Italygate.

According to the Post, the conspiracy made it all the way to the White House, with Trump’s then-chief of staff Mark Meadows sharing the theory that Italian defense contractor Leonardo worked with the CIA to swap votes. Meadows reportedly sent it to the acting attorney general as Trump pressed Meadows to find instances of alleged fraud that he could use to overturn the election.

Zack also claimed she shared the theory with Trump at a Christmas party she attend at Mar-a-Lago.

According to the Post, Meadows shared the conspiracy several days after Zack talked it up to the president. Zack, Loudermilk, and Gohmert did not respond to requests for comment from the Daily Dot.