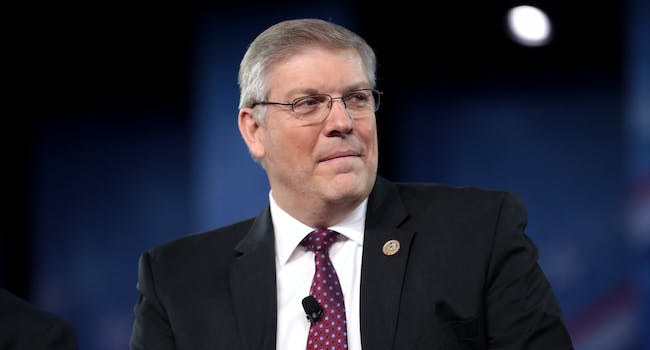 EXCLUSIVE: Rep. Loudermilk gave a radio interview that blows up his denials about hosting Jan. 6 protesters in his office

He called them a 'constituent family' yesterday.

The Daily Dot has obtained a radio interview from Jan. 6, 2021, from WBHF in Cartersville, Georgia, in which Rep. Barry Loudermilk (R-Ga.) says, “about a dozen” people were present in his congressional office in Washington, D.C. the day before the Capitol riot.

Yesterday, Loudermilk said in a statement that “a constituent family” visited him the day before the Capitol riot. That is an updated version of a previous statement by Republicans on the Committee on House Administration—which Loudermilk is a member of—that originally stated “there were no tours, no large groups, no one with MAGA hats on” given by him or other Republicans in advance of the Capitol riot.

But in the interview—given as the riot was winding down—Loudermilk made it clear that he met with people who were planning to protest on Jan. 6, and that he discussed how they wanted to be in the crowd that day to protest the results of the 2020 election.

Yesterday, the January 6th Select Committee sent a letter to Loudermilk, requesting his testimony. In the letter, they noted that “Republicans on the Committee on House Administration … claimed to have reviewed security footage from the days preceding January 6th and determined that ‘[t]here were no tours, no large groups, no one with MAGA hats on.’ However, the Select Committee’s review of evidence directly contradicts that denial.”

Loudermilk, as has become the norm for the GOP, has repeatedly downplayed his party’s involvement in the day.

He responded to the committee’s letter in a joint statement with Committee On House Administration ranking member Rodney Davis (R-Ill.) by saying: “A constituent family with young children meeting with their Member of Congress in the House Office Buildings is not a suspicious group or ‘reconnaissance tour.’ The family never entered the Capitol building.”

But in the radio interview, he was asked if he had the opportunity to speak with any of the people who came to D.C. to protest and Loudermilk says that he did.

“We actually had about a dozen people up here that wanted to come by and visit, we had them in our office, they definitely were peaceful people, people that we met at church. They were supporters of the president, they wanted to be up here as if it were another rally.”

Loudermilk adds that he checked in on the people who came to his office and said they left after the protest turned violent.

The Daily Dot has reached out to Loudermilk’s office for comment. In a video statement released today, Loudermilk claims that the family was wearing red baseball caps, which is why he’s being singled out by the committee, but also admits the family brought guests with them, which he had not previously mentioned.

He does not say that they were planning to attend the Jan. 6 protests or that he was aware of that.