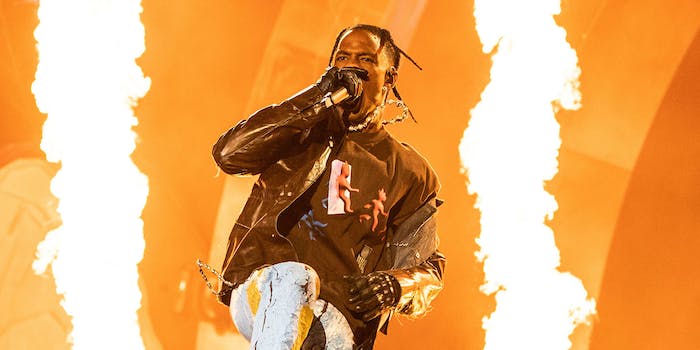 Many of the theories about the deadly concert and headliner Travis Scott invoke the occult.

Friday night’s tragedy at the Astroworld Festival is already inspiring countless conspiracy theories. While there’s a wide range of theories, one of the more consistent themes is that evil forces were to blame.

While causes of death and results of the investigation won’t be known for some time, eyewitness reports and footage are leading many to blame crowd surge. Attendees have described being so tightly packed in that they lost consciousness. A nurse who attended described the event as understaffed and many of its medics inexperienced. Others posted video of being trampled beneath the crowd.

Scott and the festival are being widely blamed for the carnage. Many are outraged that Scott continued playing for 40 minutes after emergency vehicles drove into the crowd. In breaks between his songs, attendees can be heard chanting, “Stop the show.” One widely circulated video shows a woman unsuccessfully begging a cameraman to stop the concert, telling him that people are dying in the crowd. A more disturbing clip shows a lifeless body being crowd-surfed to security during Scott’s performance.

Both Scott and Astroworld subsequently released statements. Scott’s said he is “devastated” and that the Houston, Texas police have his “total support as they continue to look into this tragic loss of life.” The festival’s statement said authorities are looking into “the series of cardiac arrests that took place.”

Various rumors and conspiracies about what caused the deaths and injuries are rapidly spreading online.

Based on the Houston Police Department chief saying that a security officer lost consciousness after feeling “a prick in his neck,” some have claimed that unknown assailants were injecting people with drugs. (Addiction experts say this is highly unlikely.) Telegram channel Nothing But Truth wondered if people were actually being injected with the COVID-19 vaccine.

TMZ also claimed someone injected people with drugs at the event.

Others online are theorizing that supernatural forces caused the tragedy.

People are claiming that the festival was a demonic ritual, energy harvesting event, or something similarly evil and magical. Some believe that the tragedy was caused by the “Kardashian curse.” Scott is in a relationship with Kylie Jenner, who attended the festival alongside her sister Kendall.

On Telegram, a rumor is circulating that the Astroworld Festival was actually “a public voodoo sacrifice ritual advertised as a music festival.”

“If you don’t believe that there was nothing demonic about that whole concert, you are spiritually blind and I pray that God open your eyes,” said one TikToker.

Many theories that evil forces were involved in the tragedy point to the festival’s marketing materials and stage set up as proof.

“See you on the other side” was a theme of the concert. Some say its imagery included symbols of the occult.

Such rumors are further fueled by Scott releasing two tracks the day before the deadly concert. The tracks’ cover art, based on the 1990s “bat boy” tabloid cover, reads, “The true dystopia is here! When the end arrives it’s really the beginning.”

Many of the rumors floating around the internet invoke the QAnon conspiracy theory that an international cabal of Satanic pedophiles controls the world.

“Travis Scott being installed by the occult global cabal is probably the only way to realistically explain how he was able to get famous, as his music is f**king awful,” opined a redditor on the Saturn Storm Cube subreddit.

“The symbolism in the poster for the Astroworld Music Festival should have told anyone thinking of going it should be a ‘hard pass.'” a subscriber wrote on the Dark to Light Podcast channel. “These demonic forces are in PLAIN SIGHT!”

Many concerts have turned deadly over the years. Days before the deaths at Astroworld, two died at an ABBA tribute concert in Sweden. NPR reports that other concerts have seen as many as 100 deaths.

At least three lawsuits have already been filed against Astroworld, Scott, Drake, and the other organizers.

The mayor of Houston has said the investigation into the deaths could take several weeks, per CNN.