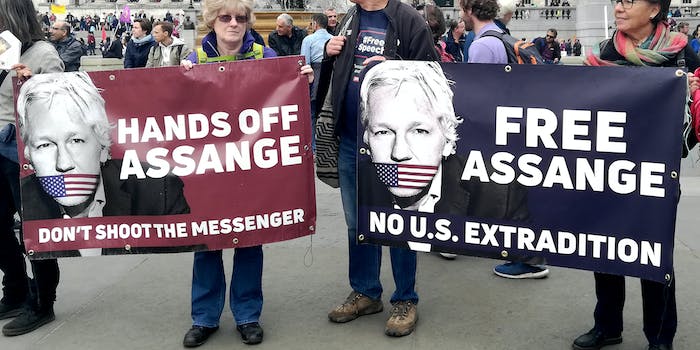 Assange can be extradited to U.S., court rules

Assange can still appeal the ruling.

A court in the United Kingdom ruled Friday that WikiLeaks founder Julian Assange can be extradited to the United States to stand trial over charges he violated the Espionage Act.

Assange was indicted by a U.S. court back in April 2019 over his actions in the release of classified documents in 2010. The U.S. says Assange encouraged and helped former soldier Chelsea Manning obtain illegal materials, in part by helping her guess a passcode.

It is a charge Assange and his team has vehemently denied, believing the prosecution to be a political witch hunt over the embarrassment Assange has caused the U.S. with his constant leaks of government secrets.

Assange has also been under scrutiny by the U.S. for his role in the 2016 election, where WikiLeaks dumped material that painted then-candidate Hillary Clinton in a negative light. Clinton and many Democrats believe the information was provided to Assange by Russia, in an attempt to aid former President Donald Trump.

Assange was formally charged after he was forcibly removed from the Ecuadorian Embassy, where he’d been staying as he sought to avoid a rape charge in Sweden, another attempt at prosecution Assange believed was politically motivated.

While a court has ruled that Assange can be extradited, the process will not begin immediately. His partner said after the ruling, according to the Washington Post, that he would appeal the ruling to the British Supreme Court. If that fails, Assange can also request a ruling on the extradition from the European Court of Human Rights.