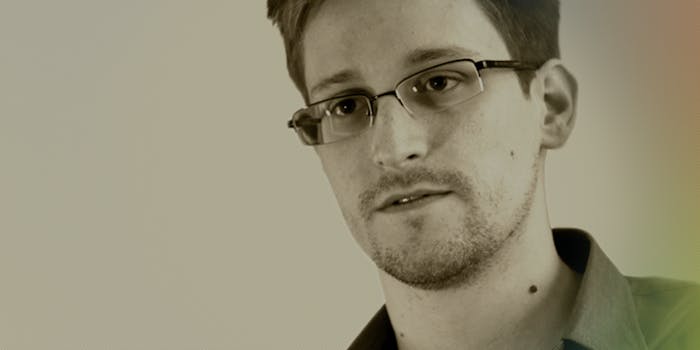 Are Assange and Biden hurting Snowden’s chances of leaving Russia?

Whistleblower Edward Snowden should probably get comfy and, maybe, learn to like the taste of borscht.

NSA whistleblower Edward Snowden should probably get comfy and, maybe, learn to like the taste of borscht.

He could be stuck in Russia for a while. He might have one of his most famous supporters, WikiLeaks founder Julian Assange, to thank. And now, according to Ecuador’s president, U.S. Vice President Joe Biden is personally getting involved.

Though there are no known reports of someone laying eyes on him in days, Snowden is believed to currently be in legal limbo, in the technically “international” space in a Moscow airport.

Snowden is the former NSA contractor who fled to Hong Kong with leaked documents, including a PowerPoint presentation that proves the existence of the Internet spy program PRISM. In response, the U.S. charged him with espionage for the leaks and revoked his passport, though Hong Kong didn’t prevent him from leaving for Russia, with the presumed final destination of Ecuador.

Leaked documents (is there any other kind nowadays?) obtained by Univision and shared with the Wall Street Journal show that Assange wrote to Ecuadorian officials Monday that he hoped his involvement with Snowden’s case hadn’t embarrassed the country. But the letter also “offered public-relations advice to top Ecuadorean officials about how to handle the crisis,” the Journal reported. One diplomat expressed concern that Assange’s actions could be seen as “running the show” in the country.

Russian President Vladimir Putin said Monday that if Snowden wants to stay in Russia, he “must stop his work aimed at harming our American partners,” and that Snowden should pick a final destination and go there.

WikiLeaks has claimed it quickly reached out to Snowden after he outed himself and that it has paid for his plane tickets, lodging, and legal counsel.

On June 24, Ecuadorian foreign minister Ricardo Patiño read aloud a letter from Snowden in a press conference. In the letter, Snowden expressed an express desire for asylum from Ecuador. Patiño said he was considering the request, but didn’t commit.

Further complicating the issue is Assange’s very personal relationship with Ecuador. He’s spent the past year housed in the Ecuadorian embassy in London, where he fled after being charged with sexual assault in Sweden in 2010. Assange has called the charges a “witch hunt.”

Earlier in the week, Twitter users shared a leaked “safepass,” effectively an emergency passport issued for the purposes of asylum, issued from Ecuador to Snowden. But though Ecuador didn’t deny the document’s existence, it was left unsigned, and thus not valid. According to yet another document obtained by the Journal, it was issued by Fidel Narvaez, Ecuador’s ambassador in London, who is close to Assange.

Though there haven’t been any confirmed recent sightings of Snowden, WikiLeaks says it has offered him substantial aid since he came forward. It claims its Sarah Harrison has assisted Snowden in person since he left Hong Kong, and that she’s still with him.

It looks unlikely Snowden will be forced to leave Russia against his own will. The country, which doesn’t have an extradition treaty with the U.S., promised Tuesday that it wouldn’t abide the U.S.’s request to turn him over.

On Thursday, President Barack Obama indicated the U.S. was easing off pressure to get Snowden back to American shores, saying “No, I’m not going to be scrambling jets to get a 29-year-old hacker.” [Snowden is 30, but was 29 when he came forward as the source of the NSA leaks.]

However, Vice President Joe Biden did get directly involved. On his weekly broadcast Saturday, Ecuadorian President Rafael Correa said that Biden had called him the day before and personally asked him to not grant Snowden asylum. He noted that Biden was courteous in his request.

This contrasts with the chair of the Senate Foreign Relations Panel, Robert Menendez (D-NJ), who warned that if Ecuador took Snowden in, it “would severely jeopardize” the countries’ trade relationship. Ecuador’s Minister of Communications, Fernando Alvarez, called Menendez’s threat “a new instrument of blackmail.”

One more person who doesn’t think Assange isn’t good for Snowden? Snowden’s father, Lonnie. In a Friday interview with USA Today, the elder Snowden’s lawyer, Bruce Fein, said WikiLeaks “are using [Snowden] to raise money,” and are trying to “keep [him] from doing the right thing.”