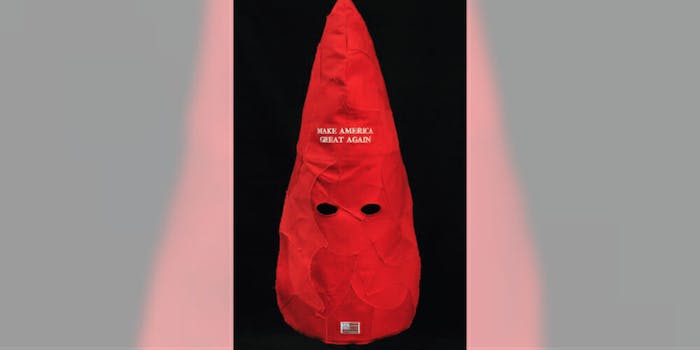 Kate Kretz is an artist who makes statements out of deconstructing the familiar, red “Make America Great Again” hats and turning them into historical symbols of extreme racism. Facebook suspended Kretz after she posted photos of her artwork on the platform.

She is set on denouncing the MAGA movement by turning the hats into other things, like the Ku Klux Klan hood or a swastika armband. The use of the swastika in her designs may have pushed the social media giant into thinking she was an extremist.

In early May, pictures of her artwork were deleted from Facebook.

Kretz then reposted the photos with “prominent text explaining that they were artworks.” Her official account was then suspended on May 9.

@censored My FB account has been disabled for posting my new MAGA hat work, critical of the president and his followers. https://t.co/MHFPbzbMlu pic.twitter.com/7zRrTZRKb9

Update 11:00am CT, May 27: Kretz told the Daily Dot her account was reinstated on Sunday morning.

“I was never able to get through to Facebook,” Kretz wrote in an email. “I suspect that it was the fourth or fifth reporter calling their PR dept that got me finally reinstated.”

She does not know whether her account was shut down because people reported her or because of the swastika used in some of her designs.

She claims she didn’t violate any community guidelines.

“(Facebook) owes us some transparency and some accountability in terms of how they review posts that they deem ‘problematic,'” she wrote. “There was no way to talk to a real person, to affect their decision in any way. I had been ‘disappeared’ by them, I lost my voice, and had no recourse whatsoever.”

On Saturday, the photos she posted on Instagram were also removed. The removal of the photos was something she foreshadowed happening, as her images were being reported by “Trump trolls.”

She wrote that she made her Instagram account private because she was afraid it would get suspended altogether.

“I have been ordering MAGA hats (all knockoffs, with the exception of one), ripping them apart, and then sewing them back together into traditional symbols of hatred,” the artist wrote in a Medium post on May 20.

Her post, denouncing the situation, has been read by almost 50,000 people as of Sunday morning.

“It is important for artists who we agree or disagree with to be able to show their work,” A De Carlo, the creator of the petition, wrote. “Many make their living via social media platforms. Not only is this an issue of artistic freedom but of livelihood.”

Kretz’s artwork, “The MAGA hat collection,” is part of a larger series dubbed #bullyculture. The collection is going to be showcased at the California-based the Jen Tough Gallery this July.

Update 2:30pm CT, May 27: The art gallery is now receiving hostile threats amid the national interest in Kretz’s story.

“They are fearful for their employees and the work,” Kretz told the Daily Dot.

Due to “hostilities and safety concerns” at the art gallery’s main location in Benicia, California, the exhibit is being relocated to “a more secure” location in San Francisco, according to the gallery.

“I wanted to call out people who wear MAGA hats … and also sound an alarm that history is repeating itself,” Kretz wrote. “I am screaming as loud as I can in the only way I know how.”

Update 7:33am CT, May 31: In an email, Kretz told the Daily Dot on Thursday that her Instagram was also disabled: “A few days back, they deleted a B&W video of a Nazi book burning I shot at the Holocaust Museum a few weeks ago, but I have posted nothing in the past week. I protested, stating the account was deleted in error, I now suspect that people who want to remove my work from the public eye are banding together to report it, and pointed them to my Medium article.”