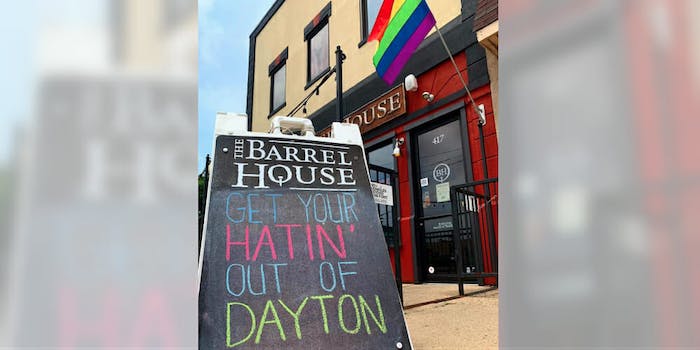 Local businesses wanted to take a stand against hate through signs.

A much anticipated Ku Klux Klan (KKK) rally in Dayton, Ohio, on Saturday afternoon, saw a measly 10 people (yes, 10). The KKK members were met with a barrage of counter-protesters and local businesses taking a stand against hate.

Officials worried the rally could turn violent, following in the footsteps of the 2017 Charlottesville rally. So, ahead of the rally, the city geared up with cops and shut down streets.

Serious Post: To everyone going to Dayton today for the counter protest.

Stay fucking frosty.
You deserve to go home today, not in a body bag.

Good luck kicking the fash out of Ohio!
Fuck the KKK, fuck Nazis, fuck white supremacy, and fuck the people that protect them.

Counter-protesters showed up hours before the KKK members arrived for their rally. The KKK members, of about 10 people, were heavily outnumbered by a much larger crowd.

I counted again, got ten people. For information on crowd count, refer to local news, which… I think one station was able to get inside the police barricade. But the idiot PIO at @DaytonPolice failed to send credentialing information to national press.https://t.co/ffBdS6J1pm

Many shared photos online of different anti-fascist signs that had popped up around the city.

Most notably were photos from local businesses, such as restaurants and transportation services that wanted to take a stand against hate groups.

So proud of how the entire city of Dayton has come together to stand against racism, hate, and intolerance.

Directions for KKK rally/counter rally. Dayton as a city is super organized on this. I did a lap around the perimeter with @FordFischer and it's pretty much political convention level security. Reminds me of DNC/Philadelphia and RNC/Cleveland with the double fence perimeter pic.twitter.com/8O1XinGD29

the KKK have a rally today in Dayton, Ohio and this is how the businesses are responding.. pic.twitter.com/mnhkpEiVUg

I’ve just arrived in #Dayton Ohio, to film whatever happens as about a dozen KKK members are expected to face off with a counter-demo of hundreds.

Other signs, made by civilians, were also seen at the rally.

A selection of some of the thousands of signs being displayed outside the fenced area where a KKK rally is being held in downtown Dayton, Ohio. pic.twitter.com/Tn95kzPws8

This is probably the funniest sign at the counter-protest outside the KKK rally in Dayton, OH. pic.twitter.com/OT7WvhVY1V

The rally was (thankfully) very anti-climatic. Freelance journalist Marcus DiPaola, on the ground, wrote that the KKK members’ signs weren’t even visible.

You had to request permission to go inside 48 hours ahead of time, and they failed so miserably at spreading that information that only one station is inside. I can't see their call letters either, so good luck with that.

The KKK has arrived and the crowd is now hanging out at the fence pic.twitter.com/EnKnuq3RTv

People had a lot of different messages for the haters.

Micah Naziri is here to face off with the KKK and brought his long gun on a sling. He's wearing a red hat that says "make racists afraid again" pic.twitter.com/legsRzPpRl

"This Jew will replace you!" — a reference to the Charlottesville neo-nazi chant "Jews will not replace us." pic.twitter.com/u0M1Juhi1v

Counter protesters tell me they’ll be going up to the KKK so their voices can be heard. Their message: stop the hate and end racism. They say they don’t know what to expect but brought a medic bag in case it gets violent. **cropped the pic due to profanity. pic.twitter.com/ALoSUZlqas

The whole rally had reportedly dispersed by 3pm ET.