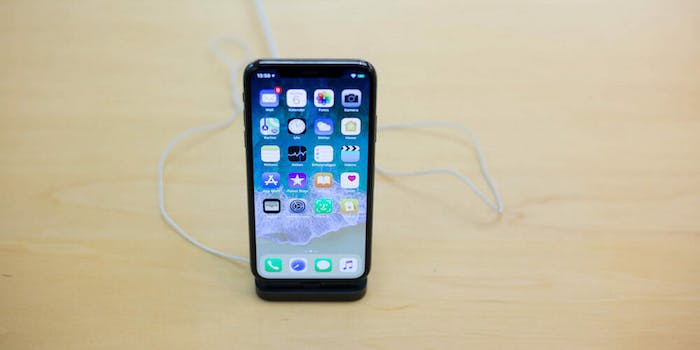 It's not all screen, the lawsuit alleges.

Two dissatisfied customers are suing Apple on the grounds that the phones in its iPhone X series do not have the screen size and pixels advertised.

Christian Sponchiado and Courtney Davis filed the lawsuit against Apple on Friday, according to documents shared by CNET.

In the lawsuit, Sponchiado and Davis complain that Apple wrongly advertised the screen size of their iPhone X, iPhone XS, and iPhone XS Max phones. It also alleges that these models don’t have the advertised screen resolutions because they don’t have the screen pixels advertised in the product description—instead of having red, green, and blue subpixels, the iPhone X has only two subpixels in each pixel, the suit alleges.

The complaint further alleges that this results in a misleading comparison between different phones on Apple’s website because it “dramatically overrepresent[s]” the number of subpixels on the phone.

The 55-page lawsuit shows with images and graphs that point out in specific detail the nature of each complaint. One diagram shows that the screen of the iPhone X, advertised to be 1125 pixels in length, is short 120 pixels because Apple counted a notch at the top of the screen as containing pixels.

They also complain that the phones are advertised as “all screen,” but are not, as shown in the images in the lawsuit.

Davis and Sponchiado both recently purchased phones from Apple’s iPhone X series. Sponchiado bought his phone in December 2017, and Davis bought hers in September of 2018. While both were disappointed in the misrepresentation of the product, Davis reportedly suffered an injury as a result of her purchase, the lawsuit states. It’s not clear from the lawsuit how the difference in screen size or pixel resulted in an injury.

Davis and Sponchiado are seeking class-action status for their suit.