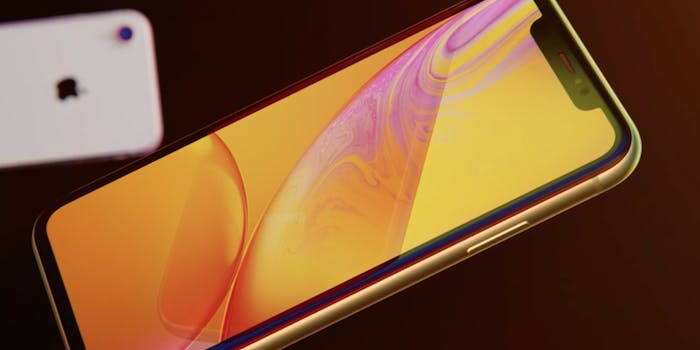 It still can’t run full HD YouTube videos. But does it matter?

Apple introduced three new iPhones at an event last week with three differently-sized, differently specced displays. Even the cheapest version, the iPhone XR, packs a punch—but it may come as a surprise to some that it’s still not 1080p.

A 1080-pixel display necessitates a resolution of 1920 x 1080 pixels. As Apple’s cheapest new iPhone—and nearly all of its predecessors, save the iPhone X—have a display with a lower resolution than this, they technically don’t play 1080p video streams at full resolution. While some are up in arms over this discrepancy, is it really something you should consider in the purchase of your next phone?

When Apple first introduced the Retina display, the idea was that it was so packed with pixels, your eyes would not be able to distinguish from one dot to the next at a normal viewing difference. Back then, that pixel density was 326 pixels per inch, and that’s the same pixel density the iPhone XR will tout. Anything above 300 pixels per inch has this same “Retina” effect for the average smartphone owner.

However, there’s another fundamental difference between 1080p on a TV and on a smartphone: the size of the device. The difference between 4K, 1080p, and 720p on a 55-plus inch TV set in your living room is stark. On a 6-inch device in your hand, less than two feet from your face, perhaps you’ll notice the increased sharpness or broadened color gamut. But as long as it’s above 300 PPI, you’re probably not going to notice that big of a difference.

If you have an iPhone 8 or older that’s not 1080p, chances the iPhone XR’s 1080p display won’t bother your optical sensibilities, either. It’s still an incredibly high resolution display. And considering how companies such as Verizon and Comcast throttle users’ data, it could be a blessing in disguise. By not requiring a 1080p stream for HD-equivalent quality, you’re saving on streaming data and likely device battery life, too.

If having a true 1080p display and being able to stream true 1080p content are a must-have for your next handset, there are plenty of options available, but the iPhone XR isn’t one of them. If all you care about is having a good quality display—which is a very important smartphone quality—then the iPhone XR and many other non-1080p phones will likely suit your needs just fine.