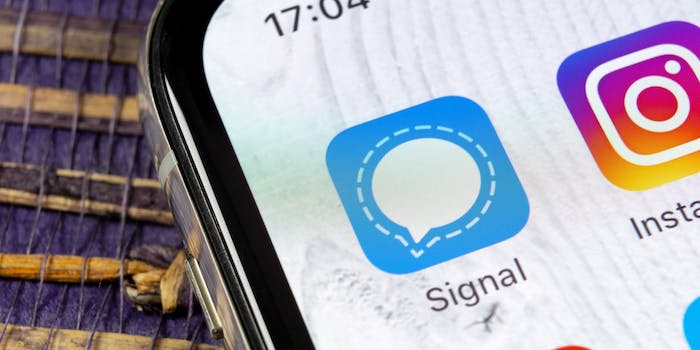 Signal makes a dire warning about Congress’ EARN IT Act

The bill has faced intense scrutiny from digital rights groups.

Signal, the popular encrypted messaging app, said recently that a hotly contested bill in Congress would make it impossible for companies like it to operate in the United States because of a potential to clamp down on end-to-end encryption.

Joshua Lund, a developer at Signal, explained the issues with the EARN IT Act in a blog post published earlier this week. The bill would strip websites’ legal immunity shield under Section 230 of the Communications Decency Act unless they adhere to a set of “best practices” put together by a commission. The bill purports to remove child exploitation content online.

Section 230 essentially protects websites from being liable for what is posted on them by third parties. Specifically, it says “no provider or user of an interactive computer service shall be treated as the publisher or speaker of any information provided by another information content provider.”

The Electronic Frontier Foundation has called the section “one of the most valuable tools for protecting freedom of expression and innovation on the internet.”

The bill has also faced scrutiny from lawmakers. Sen. Ron Wyden (D-Ore.) called the bill a “Trojan horse” and “terrible legislation” that was a “transparent and deeply cynical effort by a few well-connected corporations and the Trump administration to use child sexual abuse to their political advantage, the impact to free speech and the security and privacy of every single American be damned.”

In the blog post, Lund makes it clear that if a backdoor into end-to-end encryption is part of the EARN IT Act, it would make it impossible for Signal and other companies like it to operate in the United States.

“Some large tech behemoths could hypothetically shoulder the enormous financial burden of handling hundreds of new lawsuits if they suddenly became responsible for the random things their users say, but it would not be possible for a small nonprofit like Signal to continue to operate within the United States,” Lund wrote. “Tech companies and organizations may be forced to relocate, and new startups may choose to begin in other countries instead.”

Signal uses end-to-end encryption to make messages only visible to the sender and the receiver, unlike other messaging platforms. It has become increasingly popular over the past several years.

The EARN IT Act has been heavily criticized by a number of digital rights groups given the possibility encryption could be targeted. One petition has garnered more than 28,000 signatures from the public urging Congress to reject the bill.