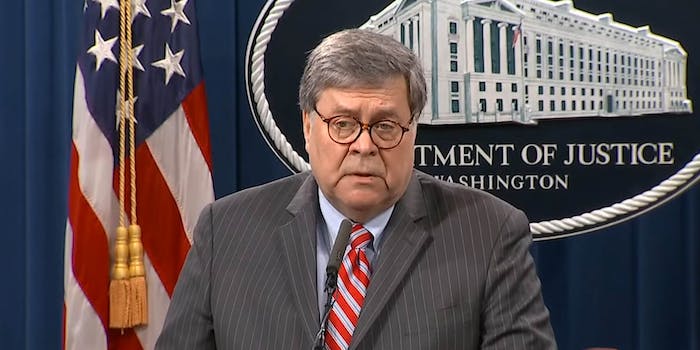 Law enforcement was vague on how exactly they unlocked the phones.

However, in a press conference, the two repeatedly blasted Apple for not helping them do so.

The law enforcement officials made the announcement at a press conference on Monday, where they said the unlocked phones contained information linking the suspect Mohammed Saeed Alshamrani to Al Qaeda.

Earlier this year, Barr called on Apple to help the government unlock the phone, echoing requests from the government in 2015 following the San Bernadino attack. Apple refused to comply with Barr’s request, but said it turned over “many gigabytes of information.”

Shortly after Barr’s request earlier this year, President Donald Trump also weighed in, saying that he wanted Apple to “help” the government and tweeted about the situation, saying they had to “step up to the plate and help our great country.”

Barr and Wray were vague on Monday about how exactly law enforcement unlocked Alshamrani’s phone, saying that it took “relentless efforts and ingenuity of FBI technicians.” Wray said the technique the FBI used to unlock the phone was “not a fix for our broader Apple problem” and that it was of “pretty limited” application.

NBC News, citing sources, reported that the phone was unlocked by an “automated passcode guesser.”

“Through a combination of skill and determination, the men and women of the FBI have succeeded in accessing the terrorists’ two phones, both of which he tried to destroy,” Wray said.

Throughout the press conference, the two officials repeatedly bashed Apple’s decision not to help them unlock the phone. Barr has repeatedly discussed a desire for law enforcement to have a back door into encryption on phones—an issue that has received backlash from digital rights and privacy advocates.

“We, effectively, received no help from Apple,” Wray said. “We canvassed every partner out there and every company that might have had a solution to access these phones.”

Wray also seemed to blame Apple for the “cost” of not unlocking the phone, arguing that personnel had to divert from other work and it delayed the investigation.

“Apple’s decision has dangerous consequences for public safety and national security and is, in my judgement, unacceptable. Apple’s desire to provide privacy for its customers is understandable, but not at all costs.”