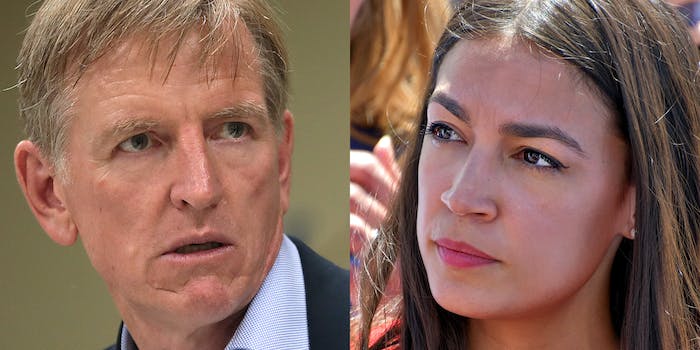 Gosar posted the video on Twitter on Sunday. The platform subsequently hid it behind this warning, “This tweet violated the Twitter Rules about hateful conduct. However, Twitter has determined that it may be in the public’s interest for the tweet to remain accessible.”

In a statement to the Daily Dot, Twitter noted, “As is standard with this notice, engagements with the tweet will be limited. People will be able to quote tweet the tweet, but will not be able to like, reply or retweet it.”

Ocasio-Cortez responded in a series of tweets on Monday night.

“So while I was en route to Glasgow, a creepy member I work with who fundraises for neo-Nazi groups shared a fantasy video of him killing me. And he’ll face no consequences bc @GOPLeader cheers him on with excuses,” she tweeted. (Ocasio-Cortez attended the 2021 United Nations Climate Change Conference in Glasgow, Scotland.)

“Fun Monday! Well, back to work bc institutions don’t protect [women of color].”

She also brought up previous instances when Rep. Ted Yoho (R-Fla.) “accosted” her to call her a “fucking bitch” (Yoho denies it) and when Greene harassed her office with a man who would later be charged for his alleged role in the Capitol riot.

Then Ocasio-Cortez turned her focus back to Gosar.

“This dude is a just a collection of wet toothpicks anyway,” she tweeted.

“White supremacy is for extremely fragile people & sad men like him, whose self-concept relies on the myth that he was born superior because deep down he knows he couldn’t open a pickle jar or read a whole book by himself.”

People applauded Ocasio-Cortez’s response. “Holy shit that burn at the end,” said one.

Many suggested that federal law enforcement get involved. (Threatening to attack a government official is a felony.)

“If an ordinary citizen did this, wouldn’t the FBI or Secret Service pay that person a visit?” @bencalwell tweeted.

Several pointed out that employees would likely be fired for such conduct.

At a minimum, some suggested Gosar should be punished by either his caucus or Congress as a whole. Some tagged House Speaker Nancy Pelosi (D-Calif.) or Minority Leader Kevin McCarthy (R-Calif.)

“There MUST be consequences for this,” @bkindivisible tweeted. “Threatening a member’s life is unacceptable.”