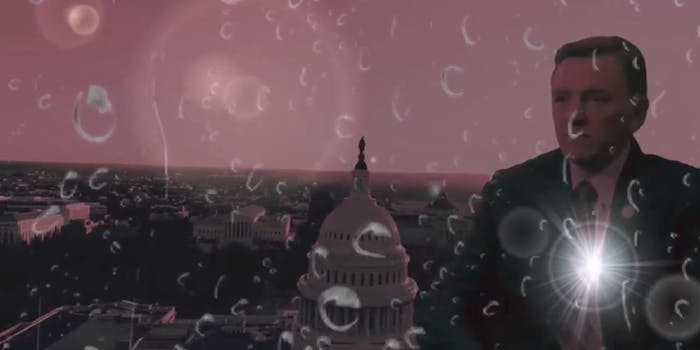 The clip has been seen 2.5 million times.

Rep. Paul Gosar (R-Ariz.) shared a video to Twitter on Sunday that was edited to show himself killing Rep. Alexandria Ocasio-Cortez (D-N.Y.).

The video, which has been shared more than 28,000 times, uses clips from the popular Japanese anime Attack on Titan. Gosar is also depicted swinging two swords at President Joe Biden.

“Any anime fans out there?” Gosar asked.

The video includes Japanese text that reads “attack of immigrants,” a play on the anime’s title, alongside clips of Border Patrol agents. As noted by Newsweek, the words “drugs, crime, poverty, money, gangs, violence” and “trafficking” likewise appear over clips of migrants.

Two other lawmakers, Rep. Lauren Boebert (R-Colo.) and Marjorie Taylor Greene (R-Ga), appear in the video as well. The video closes out with former President Donald Trump standing with Gosar.

The video spurred applaud from Gosar’s followers and widespread criticism from countless others. Twitter told the Daily Dot in a statement that, “We have placed a public interest notice on this Tweet as it violates our hateful conduct policy. As is standard with this notice, engagements with the Tweet will be limited. People will be able to Quote Tweet the Tweet, but will not be able to Like, Reply or Retweet it.”

Numerous lawmakers, including Rep. Eric Swalwell (D-Calif.), weighed in by condemning the video as calls were made for Gosar to be suspended from the platform.

“Happy Monday in America, where @GOPLeader McCarthy’s colleague just posted a video of himself swinging two swords at President Biden,” Swalwell wrote. “These blood thirsty losers are more comfortable with violence than voting. Keep exposing them.”

The video has been viewed more than 2.5 million times as of Monday afternoon.