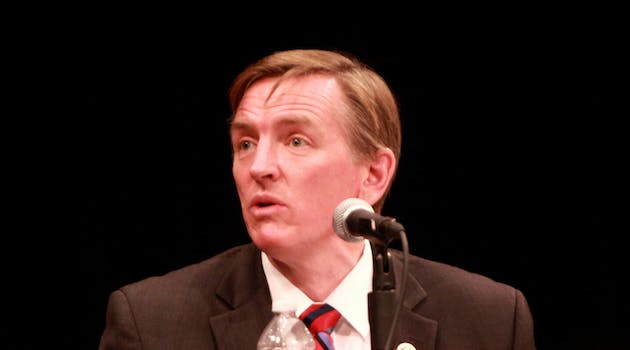 The form says he was meeting with members of U.K. Parliament.

On Thursday, reports emerged that Rep. Paul Gosar (R-Ariz.) met with Steve Bannon and far-right leaders on a trip to London last summer—when he said he was meeting with members of Parliament.

According to Sludge, a  news site about special interests, Gosar traveled to London last July with the Middle East Forum, a group that “promotes American interests in the Middle East and protects Western values from Middle Eastern threats,” and “emphasizes the danger of lawful Islamism,” according to its website.

Gosar’s disclosure form states that on Saturday, July 14, he had personal time until 8:00pm, when he was scheduled to attend a dinner with “Members of UK Parliament” to discuss “the need to protect the right of free speech.” According to his disclosure form, Gosar would be responsible for expenses paid on July 14. The form was submitted July 26.

But instead of meeting with members of Parliament, Sludge reports, Gosar was actually meeting with Bannon, Trump’s former advisor, and several members of European far-right parties. Footage from the new documentary The Brink, in which filmmaker Alison Klayman followed Bannon after his ouster from the White House in 2017, shows Gosar at Bannon’s July dinner. The Guardian also reported on the meeting later in 2018 and placed Gosar there.

Members of Congress aren’t required to disclose travel activities they paid for themselves. But Sludge’s reporting casts doubt on the likelihood that Gosar could have “paid for his meal before heading to the alleged event with U.K. members of Parliament, which was scheduled to run from 8-9:30 pm according to the disclosure.”

If Gosar is found to have inaccurately reported his travel activities, he could be publicly reprimanded and required to resubmit an accurate report, Sludge reports. But the penalties are more serious if he was found to have intentionally covered up the dinner with Bannon and European far-right leaders.

According to Craig Holman, government affairs lobbyist at the nonprofit group Public Citizen, Gosar could face “a variety of penalties for violations of congressional rules, including reprimand, censure and even expulsion in the most extreme cases. At the same time, deliberately filing a false report to Congress is a violation of federal law, in which the U.S. Attorney’s office may seek a fine up to $11,000, five years imprisonment, or both.”

Rep. Gosar’s office did not return the Daily Dot’s request for comment by press time.