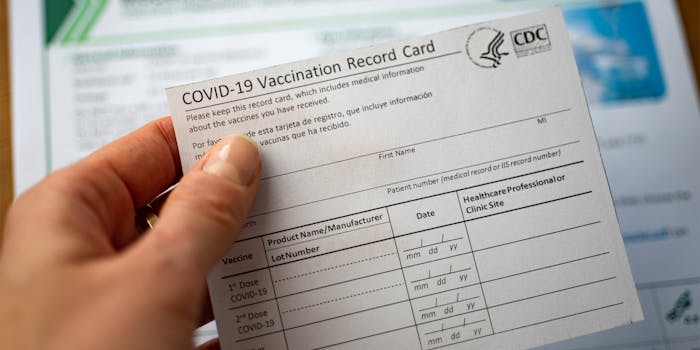 A New Jersey woman was charged on Tuesday for running a fake COVID-19 vaccination card ring.

Jasmine Clifford, a 31-year-old who was known on Instagram as @AntiVaxMomma, was charged with selling roughly 250 fake cards in a Manhattan criminal court.

Barkley and 13 other individuals who had purchased the fraudulent cards, including some who worked in the healthcare industry, were charged for their involvement.

While those who purchased the faux cards are expected to face a felony charge, the New York Times notes that Clifford will likely face two felonies and a misdemeanor. Barkley could face a single felony and a misdemeanor charge.

Prosecutors alleged that Clifford charged customers $200 for each fake card. Those willing to pay an additional $250 could have their names entered into New York’s official immunization database by Barkley.

News of the operation went viral last week after the TikTok user @Tizzyent filmed himself messaging with Clifford on Instagram. Prosecutors say they had already been investigating Clifford prior to the TikTok videos publication.

Speaking with the Daily Dot, @Tizzyent, an independent filmmaker from Florida whose first name is Michael, said that Clifford’s arrest renewed his faith in the system.

“[It] makes me feel better to know that law enforcement and prosecutors take this kind of thing very seriously; that they aren’t going to let people put others at risk by perpetrating fraud when we were in the middle of a pandemic,” he said. “People may not want the vaccine and that is their right, but they need to understand making or carrying fake vaccine credentials is a crime and they very well may face legal and financial repercussions.”

Clifford’s operation is just one of many that have been uncovered across the Internet on sites such as Etsy, Facebook, and Amazon.