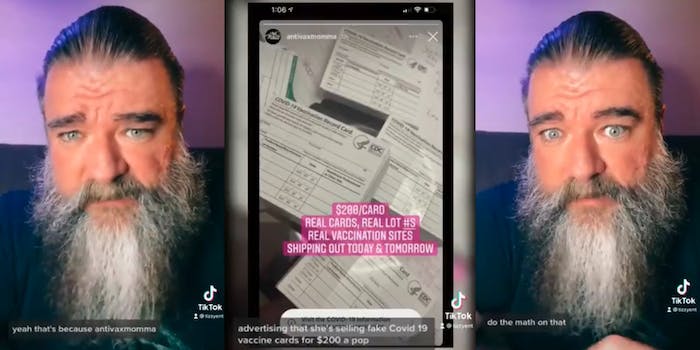 An anti-vax Instagram user could be working with pharmacy and hospital workers to cheat the system.

A popular TikTok user appears to have uncovered an ongoing scam that allows unvaccinated people to be listed as vaccinated in medical databases.

The Instagram user, known as @5starjazziiii, openly advertised the fake vaccination card service to her more than 300,000 followers.

In one Instagram story, @5starjazziiii notes that she is looking to “expand her team” before asking pharmacy and hospital workers with “computer access” to send her a message.

Posing as a Walgreens employee, @tizzyent sent a message to @5starjazziiii and was promptly given her cell phone number.

During the pair’s conversations, @5starjazziiii alleged that she had employed a person in New York who would enter unvaccinated individual’s names into the vaccination database in order to generate a lot number. The lot numbers could then be placed onto the fake vaccination cards, making it nearly impossible to distinguish them as fake.

After asking about the size of the operation, @tizzyent was told by @5starjazziiii that the individual in New York was making around $10,000 a week.

Although @tizzyent initially wondered why someone would risk jail time to run a fake vaccination card racket, it became clear after @5starjazziiii had stated in a comment on Instagram that she believed the vaccine was sterilizing children as part of the “LGBTQ agenda.”

But @tizzyent says the scam will soon come to an end given that the FBI has been notified. In closing, @tizzyent also questioned whether some of the breakthrough cases among the vaccinated could have actually been misattributed.

“When I hear people say things like ‘Why bother getting the vaccine, people are getting Covid who are fully vaccinated?’ I have to wonder, ‘Are they?'” @tizzyent said.

As of press time, @tizzyent’s TikTok has been viewed more than 250,000 times.