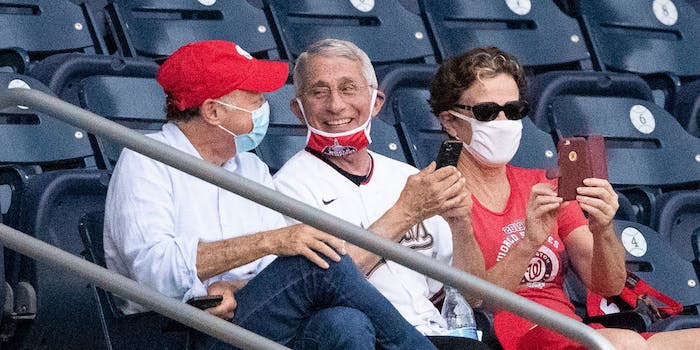 He was sitting next to his wife.

Naturally, the moment devolved into partisanship.

While everyone could agree that Dr. Anthony Fauci’s first pitch was a disaster, it’s what came after that sparked a fight.

Fauci, who is a self-proclaimed Nats fan, stayed around to watch some of the game.

Conservatives said the move was hypocritical as stadiums across the country are empty due to the coronavirus pandemic.

“Fans still aren’t allowed in, but he is,” wrote @cushmanMLB.

Even the most anti-Fauci advocate should understand the difference between three people given a special accommodation and 45,000 people gathering together then dispersing throughout a metropolitan area night after night.

As phony as the outrage is, the anti-mask brigade also jumped on a photo of Fauci with his mask down and sitting in close quarters to two other people.

The man on the right is a “close friend,” Fauci said. The other is his wife, who he presumably in a quarantine group with.

Still, given the current partisan nature of mask-wearing, Fauci probably should have done his best to keep his on, even if it wasn’t absolutely necessary.

On Fox News on Friday, Fauci was asked about the photo. He said he had been photographed while in the middle of drinking water and that after he was tested yesterday for COVID-19, the results were negative.