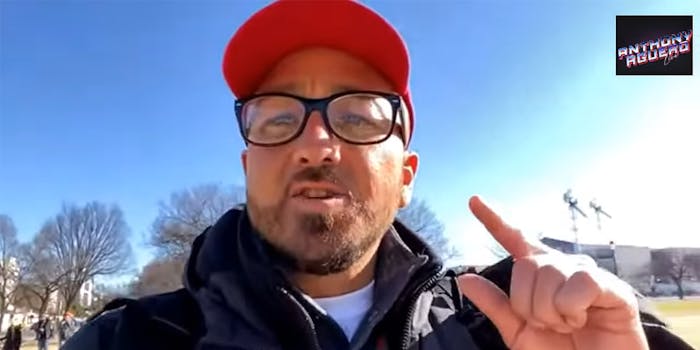 Greene's ally was there, even as she has blamed antifa.

Rep. Marjorie Taylor Greene’s (R-Ga.) connection in the Capitol insurrection on Jan. 6 has just been amped up, as a personal associate of the congresswoman, Anthony Aguero, was spotted among the masses.

According to a CNN report, Aguero, a conservative activist, live streamer, and friend of Greene, previously said after the riot that he made it to the Capitol complex but claimed to be an “independent journalist” reporting on the insurrection.

Aguero declined to answer if he had been inside the Capitol, and even claimed videos of him inside weren’t authoritative. But now there is video of him, showing him with the throng of former supporters of President Donald Trump invading the building.

CNN’s KFile posted ​visual evidence​ that Aguero was indeed inside the Capitol building. A still shows Aguero outside the Rotunda, near the building’s large, bronze Columbus Doors.

Aguero also posted a video to Instagram from what appears to be a balcony or ledge of the Capitol. He wrote “#MAGA” in the caption.

CNN reports Aguero was heard chanting “heave-ho” while rioters attempted to break in from the Capitol’s western end. He allegedly chanted “our house” with the Capitol mob.

Aguero also posted a live stream review of the events on YouTube account, saying that he “stood with” Greene, saying “that woman has more courage than most of the men that were in [the Capitol].”

Greene has a sordid history of pushing wild conspiracies, including falsehoods that imply the election was somehow stolen from Trump. She has even suggested antifa and Black Lives Matter were behind the Capitol insurrection.

Rep. Jimmy Gomez (D-Calif.) introduced a resolution to expel Greene from Congress, stating the Georgia representative “advocated violence against our peers, the Speaker, and our government.”

“I take no joy in introducing this resolution, but any member who cites political violence and threatens our lives must be expelled,” said Gomez to CNN.