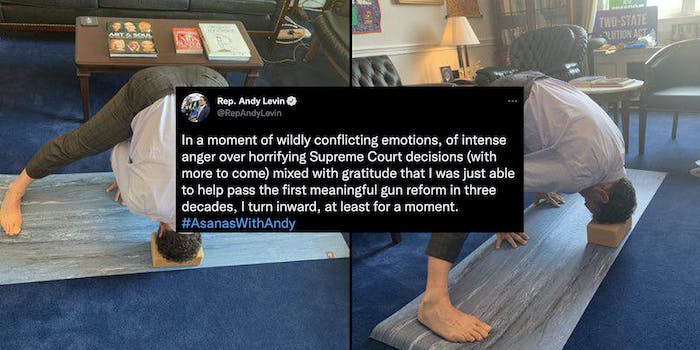 ‘Why did you delete this?’: Democratic congressman responds to abortion ruling by tweeting pics of him doing yoga

'I just want you to know I saw it and you suck.'

A Democratic lawmaker was ridiculed on Twitter after responding to the overturning of Roe v. Wade on Friday with a tweet about yoga.

In response to the Supreme Court decision regarding abortion rights, Rep. Andy Levin (D-Mich.) shared two photographs of himself in a meditative pose alongside a comment celebrating his own involvement in recent gun control legislation.

“In a moment of wildly conflicting emotions, of intense anger over horrifying Supreme Court decisions (with more to come) mixed with gratitude that I was just able to help pass the first meaningful gun reform in three decades, I turn inward, at least for a moment,” Levin wrote.

The tweet was quickly seen by many as out-of-touch, leading to an onslaught of criticism from both sides of the aisle.

“[T]he supreme court just revoked a constitutional right and you’re in your office trying to suck your own dick?” one user asked.

Countless users sent Levin screenshots of the tweet while reminding him that the “internet is forever.”

“[H]ey @RepAndyLevin you deleted this but I just want you to know I saw it and you suck,” another Twitter user wrote.

Prominent right-wing Twitter users such as conspiracy theorist Jack Posobiec weighed in as well, mocking the lawmaker for his questionable tweet.

“Hi @RepAndyLevin!” he wrote. “Why did you delete this?”

Others argued that Levin appeared identical to an ostrich putting its head in the sand, an emblematic gesture of Democratic lawmakers failure.

Despite the widespread attention on the tweet, Levin has thus far declined to comment on its removal. The tweet is hardly surprising, however, given that Levin regularly shares photographs of himself performing yoga.

Incredibly, the bizarre display was far from the only thing done by a Democratic politician on Friday that was viewed with disdain.

Sen. Nancy Pelosi (D-Calif.) responded to the Supreme Court ruling on Friday by reciting a poem.

Shortly after the ruling, Missouri announced that nearly all abortion was now banned in the state. Many other states are expected to follow.