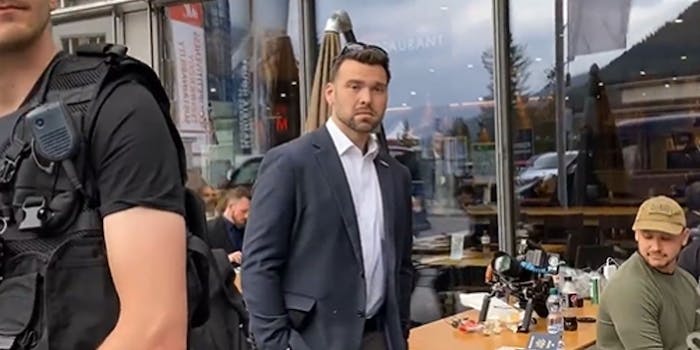 Authorities questioned him outside a café.

The incident resurfaced a June 2021 WEF article about slowing the spread of online disinformation that used a photo of Posobiec. The piece doesn’t mention his name, although the image does.

The WEF is a 50-year-old nongovernmental organization that advocates for ethics in business and government, such as by corporations paying their fair share of taxes and taking action on climate change.

Many people, conservatives included, despise the WEF. They believe it is composed of elite globalists who exert undue influence without accountability.

Many take particular issue with predictions the WEF made in 2016 about what life could look like in 2030.

These include the widely derided “you’ll own nothing and be happy,” the United States no longer being the world’s superpower, and people eating less meat. In lieu of owning, the WEF predicted people might rent. It suggested a small contingent of nations would take the U.S.’s place in international relations. Its prediction about meat was related to climate change and the environment.

Conservatives regularly trot these predictions out to launch criticisms at the WEF.

The WEF is currently holding its annual conference in Davos, Switzerland. The wide range of topics being discussed include vaccine development, preparing for the next pandemic, equal rights, Russia’s invasion of Ukraine, trade, and the environment.

Posobiec was reportedly there to film content for a Turning Point USA documentary about the WEF.

Video of the incident in Switzerland shows Posobiec sitting outside a café surrounded by police. Their badges bear the WEF logo.

In another video of the incident, an officer told a reporter, “We’re just making a normal police control, because you know, it’s WEF, everything’s very sensitive.”

Posobiec and his crew were reportedly detained outside the café for roughly an hour. No charges were filed and no one was handcuffed or arrested, per the right-wing Daily Caller.

Posobiec told Tim Pool’s website, “They said we were ‘suspicious’ because we were filming at the entrance.”

WEF hasn’t commented on the matter.

Posobiec has made the most of his detention, including tweeting about getting “thrown in Davos lockup.” He also falsely claimed that WEF has “its own paramilitary police force.” He later acknowledged that the officers who questioned him were local authorities assigned to the WEF, but hasn’t corrected his previous statements.

His fans and allies have eaten it up. Donald Trump Jr. and Rep. Marjorie Taylor Greene (R-Ga.) are among those who tweeted about it.

“I guess the Davos globalists don’t believe in freedom of the press!” Trump wrote.

The incident resurfaced the WEF’s tweet and article about combatting online disinformation, which used Posobiec’s photo.

Many suggested that it’s evidence that WEF targeted Posobiec.

“Ahh. So this is why @JackPosobiec was detained by Swiss police,” said one.

Posobiec continued reporting on the WEF conference from Switzerland on Tuesday.