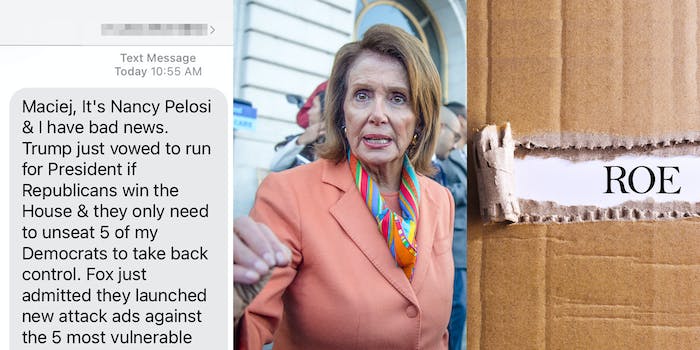 ‘Can you chip in $15?’: As Roe vs. Wade overturns, Nancy Pelosi emails and texts voters to ask them for money, sparking debate

This morning, the Supreme Court overturned Roe v. Wade (1973), a decision that federally protected abortions, with its decision in Dobbs v. Jackson Women’s Health Organization. A tweet claims that only an hour after the decision went public, Rep. Nancy Pelosi (D-Calif.) asked for donations via her email list.

“Less than an hour after the repealing of Roe V. Wade Nancy Pelosi uses it to ask for more donations,” @ampol_moment tweeted, alongside a screenshot of what looks to be an email sent from Pelosi’s campaign with links to “chip in” for the upcoming midterm elections.

The email says that Roe v. Wade was repealed and said that “how we act TODAY will decide the future of reproductive rights.”

“Can you chip in $15 so we can WIN these midterms and finally codify reproductive rights into law?” reads the email.

Many replies opined that Pelosi’s email was useless and simply a ploy to drum up funds.

“What the fuck does $15 do for overturning a Supreme Court decision?” @machiavelliskr tweeted. “How does $15 win a midterm? What the fuck.”

“I cannot believe people are going to die… Give me 10.000 dollars,” @hontonikyominai tweeted, parodying Pelosi.

“‘I know we didn’t do anything to codify Roe V Wade for 50 years but can we pleaaaaase have some more money and we’ll do something about it next time I swear!’” @dead1337 tweeted, also making fun of Pelosi.

Some brought up Pelosi’s support for Rep. Henry Cueller (D-Texas), the only anti-abortion Democrat.

Democrats have been unable to codify Roe, which would mean passing it in the House and Senate before President Biden signs it into federal law, because though they have a majority in both houses of Congress, legislation to protect abortion would need 60 votes in the Senate to overcome the possibility of a filibuster.

And some see the Democrats’ decision to not abolish the filibuster as a way to ensure that abortion rights remain vulnerable so that they can be used as fodder to get out the vote for Democrats.

Many expressed that view on Twitter in the wake of Roe being repealed.

“Democrats have promised to codify Roe for years and failed to do so in order to use it as a carrot for fundraising and votes,” @coll3eng tweeted.

“The Democrats had nearly 50 years to codify roe, Obama in fact ran on codifying it,” @nick_mellott tweeted. “They knew something like this could happen and just watched it [happen].”

We’ve reached out to Pelosi’s office.