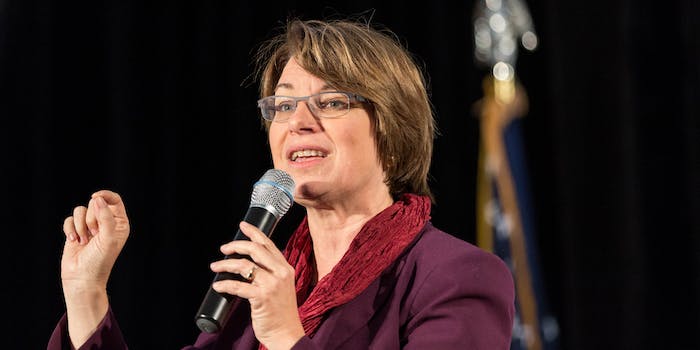 Other outlets have reported on the alleged hostile work environment, and the senator addressed the issue during a CNN town hall earlier this month.

These are serious issues that someone who has announced they are running for president should have to address.

However, in the Times story on Friday, it led with an anecdote of the Minnesota senator reportedly berating an aide for losing a fork she would use to eat salad on a flight.

Without a fork to eat, according to the Times, Klobuchar used a comb—and then told the aide to clean it for her.

As the newspaper put it:

What happened next was typical: Ms. Klobuchar berated her aide instantly for the slip-up. What happened after that was not: She pulled a comb from her bag and began eating the salad with it, according to four people familiar with the episode.

Then she handed the comb to her staff member with a directive: Clean it.

Twitter, of course, had many questions about the “salad comb.”

"You heard me. Fetch the salad comb" pic.twitter.com/uc4ZSXq6gf

Things I’ve eaten salad with when I didn’t have a fork: chopsticks; my fingers; a spoon.

A thing it would never occur to me to eat a salad with: a comb.

Probably not much going on today…hey, what's a salad comb… pic.twitter.com/rIPLK4U9WC

Other people pointed out that the substance of the Times story was more important than a salad comb.

The report also notes how Klobuchar reportedly had a policy that required employees who took paid parental leave to remain with her office for “three times as many weeks as they had been gone,” which the Times described as “unusual” for members of Congress.

People, using a comb to eat a salad, while weird, is not the point of the story!

Like, do you *really* care whether a senator once ate a salad with a comb?