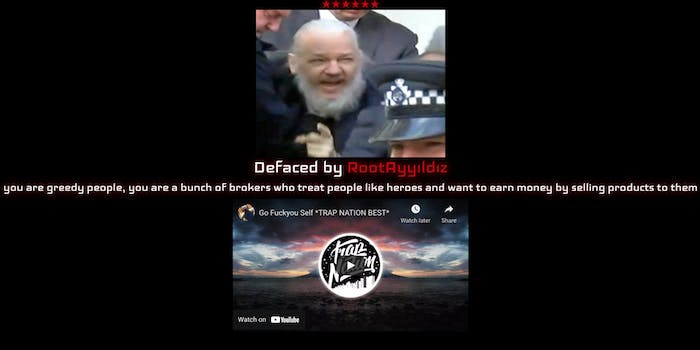 A message accusing the anti-secrecy organization of being 'greedy' was left on numerous subdomains.

An alleged Turkish hacker claims to have defaced a page on WikiLeaks’ online store on Monday in protest of the anti-secrecy organization.

The hacker, known online as RootAyyildiz, accused the organization of being “greedy,” posting the message alongside an image of WikiLeaks founder Julian Assange.

“[Y]ou are greedy people, you are a bunch of brokers who treat people like heroes and want to earn money by selling products to them,” the hacker wrote.

The defacement, which also includes an embedded YouTube video titled “Go Fuckyou Self *TRAP NATION BEST*,” was made on at least five subdomains for the organization’s official web store.

Speaking with the Daily Dot, RootAyyildiz claimed that he was able to deface the site after using social engineering against Shopify, a service for setting up and running online stores.

The hacker is also known to post nationalistic videos in support of Turkish President Recep Tayyip Erdoğan as well as pro-Islamic messages.

Gabriella Coleman, a professor in the Department of Anthropology at Harvard University and faculty associate at the Berkman Center for Internet and Society, told the Daily Dot that while defacements can sometimes precede more substantial hacking and leaking, the tactic most often has little impact from a technical standpoint.

The Daily Dot reached out to WikiLeaks to inquire about the defacement but did not receive a reply by press time.