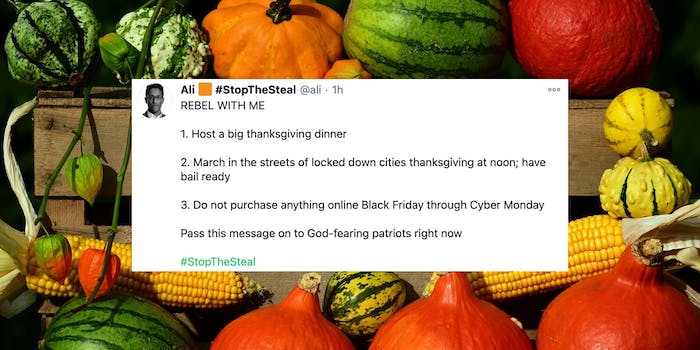 A far-right activist behind the campaign believes he will 'bring the system to a halt.'

A popular far-right commentator is attempting to launch a Thanksgiving rebellion amid the ongoing coronavirus pandemic.

Ali Alexander—one of the activists behind “Stop The Steal,” a protest movement based entirely on debunked allegations of widespread voter fraud—is urging his fellow conservatives to ignore social distancing guidelines during the upcoming holiday.

In a tweet on Thursday, Alexander called on his more than 164,000 followers to not only host a big Thanksgiving dinner but to march in the streets in defiance of COVID-19 lockdowns.

Alexander also demanded that conservatives refuse to make any purchases online between Black Friday and Cyber Monday before calling for his message to be passed on to “God-fearing patriots.”

Appearing to express delusions of grandeur, Alexander went on to state that he would singlehandedly “bring the system to a halt.”

Despite the rallying cry, only a handful of Alexander’s conservatives followers have expressed support for the idea thus far.

“Patriots must unite for our country,” @400moreyears wrote. “We must defend Freedom.”

But the call to action was mocked as well, with some users accusing Alexander of endangering vulnerable populations.

No other prominent conservative figures seem to have backed Alexander’s specific campaign yet, although many right-wing Americans have noted they will be planning large Thanksgiving dinners regardless.

Even White House Press Secretary Kayleigh McEnany has signed on to a murder Thanksgiving, calling Americans “freedom-loving” people and called the recommendations and restrictions “Orwellian.”

Alexander’s remarks come as the pandemic averaged more than 154,000 new cases per day over the past week. Total cases in the U.S. have skyrocketed past 11.5 million, with 250,000 deaths counted so far.

Hospitals have also begun to buckle under the massive influx of patients. Experts warn that the situation will likely intensify due to the holiday season.