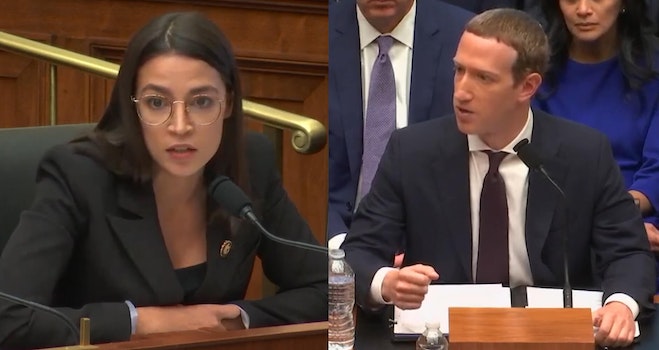 Zuckerberg has been grilled by numerous lawmakers on Wednesday.

Rep. Alexandria Ocasio-Cortez (D-N.Y.) grilled Facebook CEO Mark Zuckerberg about the company’s political advertising policies on Wednesday during a House of Representatives hearing about plans to launch its cryptocurrency Libra.

By the end of the back-and-forth, Zuckerberg said the New York lawmaker would “probably” be able to run a hypothetical ad claiming Republicans voted for the Green New Deal.

The exchange between Ocasio-Cortez and Zuckerberg had been anticipated, not only because she serves on the House Financial Services Committee that was holding the hearing, but because the New York lawmaker had openly asked her 5.6 million Twitter followers for suggestions on what they’d like to see him be asked.

On Tuesday night, Ocasio-Cortez even opened up her direct messages for a while to get question recommendations.

“Hypothetically, if you were, say, a member of Congress sitting on the Financial Services Committee given 5 minutes to question Mark Zuckerberg, what would you ask?” she tweeted on Tuesday night.

Hypothetically, if you were, say, a member of Congress sitting on the Financial Services Committee given 5 minutes to question Mark Zuckerberg, what would you ask? 🤔

On Wednesday, Ocasio-Cortez centered many of her questions about Facebook’s political advertising policy, which she mentioned were what the bulk of DMs were about.

The policy has been under fire in recent weeks after it refused to take down an ad posted by President Donald Trump that former Vice President Joe Biden’s campaign called “completely false.”

The move drew the ire of fellow 2020 hopeful Sen. Elizabeth Warren (D-Mass.), who then purposefully posted a misleading ad about Zuckerberg endorsing Trump to make a point about the company’s policy.

“So I just want to know how far I can push this in the next year,” Ocasio-Cortez asked. “Under your policy… could I pay to target predominately Black zip codes and advertise them the incorrect election date?”

Zuckerberg replied that she would not be allowed to purchase the hypothetical ad.

“Would I be able to run advertisements on Facebook targeting Republicans in primaries saying that they voted for the Green New Deal? I mean, if you’re not fact-checking political advertisements, I’m just trying to understand the bounds here.”

Earlier in the hearing, House Financial Services Committee Chairwoman Rep. Maxine Waters (D-Calif.) also ripped into Facebook and Zuckerberg, saying that she thought the company should address its “many existing deficiencies and failures before proceeding any further on the Libra project.”