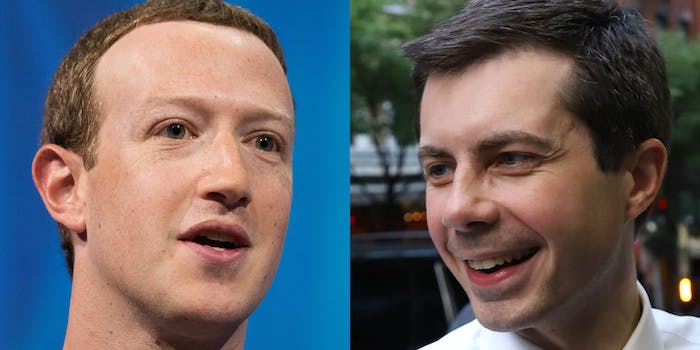 Bloomberg found that both Zuckerberg and his wife, Priscilla Chan Zuckerberg emailed Buttigieg’s campaign manager to recommend a couple people to the campaign, two of which went on to be hired.

A spokesperson for the family downplayed the report, saying that people merely asked Zuckerberg to make an introduction to the candidate, after watching Buttigieg on Facebook Live.

According to Bloomberg, Buttigieg and Zuckerberg did not know each other at Harvard but were later introduced by a mutual friend.

Zuckerberg happens to own the world’s largest communication network and advertising platform. Buttigieg has recently gone on the attack against Sen. Elizabeth Warren (D-Mass.), the 2020 Democrat most vocally calling for Facebook’s regulation.

Many on Twitter were outraged by the news and called it a conspiracy.

so buttigieg is attacking elizabeth warren while being advised by mark zuckerberg? 🤔 https://t.co/fgniKrZiaf

The Buttigieg camp called it much ado about nothing.

Exactly. A lot of sound and fury signifying nothing. We get recs from hundreds of people and we’ve received thousands and thousands of resumes. https://t.co/guc03vVP7t

Zuckerberg and Chan, according to a statement, have not settled on a candidate to support in 2020.