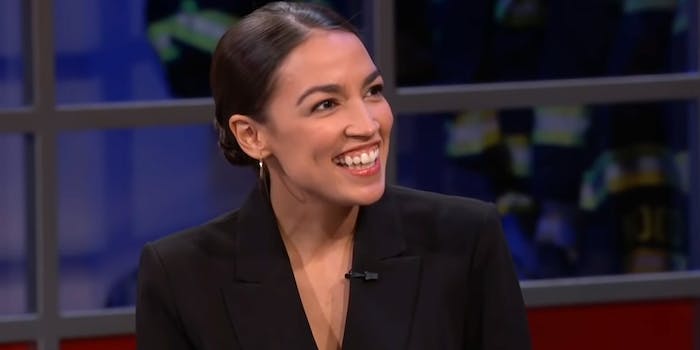 They say that imitation is the sincerest form of flattery. Of course, when the phrase first emerged in the 1700s, we didn’t have Twitter parody accounts.

By any measure, Rep. Alexandria Ocasio-Cortez (D-N.Y.) has made an immediate and powerful impact on the American political scene. She has drawn the ire of the conservative media. She has sparred with Democratic politicians and media elites. As all true celebs must do, she appeared on a Twitch stream fundraiser for trans rights. And, oh yeah, she is working on policy.

In this day and age, it is difficult to point to one particular achievement that signals AOC has “arrived” in the pantheon of policial celebrity, but one way to tell that you’ve made it in 2019 is a rash of Twitter parody accounts using your picture as their avi.

Take, for instance, the emerging 2020 presidential field. There are a ton of Bernie Sanders parody accounts, thanks to his 2016 run. Kamala Harris, Beto O’Rourke, and Joe Biden all have their fair share. However, also-rans like Julian Castro, Amy Klobuchar, Sherrod Brown, and John Hickenlooper have scarcely a parody account between them. No publicity is bad publicity, even terrible parodies.

Given Ocasio-Cortez meteoric rise to national prominence, it should come as no surprise that it takes little digging to find at least a dozen parody accounts that tweet regularly in the “voice” of AOC. Ocasio-Cortez parody accounts have become so prevalent that Twitter appears to have made a concerted effort to purge accounts that are being mistaken for AOC’s actual account by users. Two recent accounts were suspended yesterday by the social media giant.

The voice, as these conservative parodists would have it, is generally a conservative caricature of the left-wing lawmaker: communist, careless, and clueless.

You have @CortezOcasia, who uses their account to retweet other political parody accounts mocking liberal figures like Don Lemon and Nancy Pelosi. You’ve got the more straight-laced @RepOcasioNY14, who tries to make AOC seem even more left than she actually is by retweeting Cornell West videos and posting about doing socialism with Rihanna:

Then there’s @0casio2018 (that’s with a “zero” not an “O”) who imagines Ocasio-Cortez with a valley girl affect, adding “likes” and “umms” between airheaded comments and pie in the sky redistributive proclamations.

@2018_Ocasio doesn’t offer much actual parody, but rather uses the account to rehash the usual Fox News anti-socialist talking points: Venezuala, government overreach, and the rise of “PC culture.”

And of course, there’s @Crazy_AOC, who has amassed 12,000 followers with their wild-eyed AOC avi and non-stop shitposting of conservative memes.

Unlike parody of accounts of fast food restaurants or meme hats, Twitter political parody accounts have other goals besides viral humor. On both sides of the aisle, many parody accounts are painfully unfunny. Instead, they offer an outlet for the user to anonymously complain about politics in opposition to their own. Not only does the user feel more comfortable posting under their parodic nome de plume, but like-minded users feel more comfortable sharing these posts, as evidence by their massive follower counts.

There are probably a number of reasons that an account named @PelosiLuvsDebt69 could garner orders of magnitude more followers than some random person tweeting political screeds as themselves. But the most obvious (next to mistaken identity) is that even if there are no jokes, the guise of parody makes the posts seem less angry.

It is also undeniable that satirical posts online have the power to sway this discourse. Jokes about AOC’s proposed 70 percent marginal tax rate on those who make over $10 million have morphed the discourse so much that many Trump supporters believe that she actually proposed a 70 percent tax rate on all income of all citizens.

This betrays the real purpose of political parody accounts: it’s about ideology, not jokes.

Parody accounts prioritize politics over humor on the right and the left. Throughout the last two years, Democrats have gleefully spread tweets from accounts mocking President Donald Trump. Like their conservative counterparts, these are more about political point scoring than joke telling.

Generally, tweets from these accounts have more in common with an Aaron Sorkin “Have you no decency sir” monologue than a stand-up comedy set.

The tradition of political parody accounts being more about partisanship than punnery dates back well before Donald Trump or Alexandria Ocasio-Cortez took the national stage. From @MexicanMitt to @InvisibleObama parody accounts have been a way for partisans to take shots at politicians for years.

Popular parody accounts of our current moment follow the same tack of fiery opinion rather than actual humor.

Trump era favorites like @RoguePotusStaff, @AltHomelandSec, and @HoarseWisperer have followed a similarly dry playbook and have been rewarded with similarly outsized follower counts. (Disclosure: The author has been blocked by @HoarseWisperer on Twitter).

If you want further proof that political parody accounts aren’t just about being funny, look at the people who run them. Non-political parody accounts are often thought of as an outlet or even a potential opportunity for professional comedians. The man behind @LosFelizDaycare is a professional comedy writer and the alter-ego of @Seinfeld2000 is a TV producer. By contrast, political Twitter parodists come from all walks of life, including airline copywriters and government bureaucrats. The goal often seems to be blowing off a little political steam than gaining writerly esteem.

All of this is also true of the Alexandria Ocasio-Cortez parody accounts. Though the form of the tweets varies from “dank” memes to tossed off one-liners to vitriolic Fox News links, the critiques are the same. An AOC parody account tends to take the same lines of political attack that you see on Fox News. They go after the freshman congresswoman for being too far to the left, too unrealistic, too young, and too female.

The accounts share the same distrust and distaste for socialism, progressivism, and the stereotypical hallmarks of the millennial generation. For these tweeters, AOC stands in for a generation of people looking for a free hand out who don’t yet comprehend the sophisticated machinations of the world around them.

The Daily Dot interviewed @AlexandraOcasi6 and @aocpress (both user prefers to remain anonymous) about what motivates them to maintain their version of an AOC parody. Since this interview, @AlexandraOcasi6 has been suspended by Twitter, along with other AOC parody accounts including @Cortez4Prez2020. The Daily Dot reached out to Twitter for comment but has not heard back.

With their account, @AlexandraOcasi6 posted a mix of jokes and conservative criticism of the congresswoman. While more explicitly rightwing accounts like @Crazy_AOC often delve into racial and gendered memes, @AlexandraOcasi6 preferred to critique Ocasio-Cortez on policy. Their account often made jokes about Ocasio-Cortez’s tax policies, redistributive/socialist proposals, and mocked her opposition to Trump administration efforts to build a wall on the Mexcian border.

When @AlexandraOcasi6 did make a gendered joke, it was usually in the popular voice common to these accounts, which portrays AOC as a naive millennial, complete with “likes” and “umms.” The jokes were generally more about her age than her Latinx or female identity.

Like many Republicans (the user identifies as “pretty right of center”), @AlexandraOcasi6 dislikes the congresswoman’s policies because they find them unrealistic and believe that her young fan base has more energy than they do coherent politics, they told the Daily Dot:

“AOC is a fun character to parody because most of the things she says are super uninformed and would definitely qualify as gaffes if she didn’t have so much devotion from her fans.  It cracks me up how many insane things I’m able to publish that her followers totally agree with because they’ve already bought what she’s selling.”

I shouldn't have used quotes because you will prove yourself in congress (as if you haven't already and not that you have too). You are absolutely right about the sexism. #meToo

@AlexandraOcasi6 admits that they were motivated to create the account partially because they have a fondness for Ocasio-Cortez’s youthful energy. Their thoughts on AOC echo what a conservative might begrudgingly admit about Barack Obama or Beto O’Rourke:

However, the user behind @AlexandraOcasi6 doesn’t necessarily think that the prevalence of AOC parody accounts will lead to a political future beyond the House of Representatives:

“I think she’s so set on breaking things in Washington, that she’ll eventually make herself a ideological pariah with the Democratic caucus, which will prevent her from influencing anyone outside of her social media sphere.  She’s also deeply naive and I think she knows it. She’s still more of an activist than a legislator so I don’t see her becoming a pillar of our government any time soon.”

@AOCpress takes a similar tone with their account and has similar views on Ocasio-Cortez.

Their tweets paint a picture of AOC as ill-informed and naive, unfit for office and unschooled in political realities. The person behind @AOCpress is a parody account veteran, having run a parody account of Mike Pompeo until being suspended from Twitter. The Pompeo account was sometimes mistaken for the former CIA directors actual account, and was often retweeted by Donald Trump Jr. and Anne Coulter.

Like @AlexandraOcasio6, they shy away from gendered or racial jokes, but like to take on millennials and what they view as the extremity of PC culture.

@AOCpress personally views Ocasio-Cortez and her fans as unintelligent. They told the Daily Dot, “I chose AOC because I think she’s dumb as hell and I can attribute any dumb things to her.”

The person behind @AOCpress also identifies as a conservative: “I am an ardent Trump supporter and have been since June 16, 2015.” Prior to starting their AOC account, they ran a Mike Pompeo parody account aimed at promoting the conservative EX-CIA chief.

Unlike @AlexandraOcasi6, @AOCpress sees Ocasio-Cortez as a serious political threat. “I believe AOC is a real threat and if the Country continues on this downward spiral I see a President AOC within the next 25 years.”

Only time will tell if @AlexandraOcasi6’s prediction will come true or if @AOCpress is right.

Will Ocasio-Cortez catapult to the kind of notoriety that leads to immortal parody accounts like @PimpBillClinton (234,000 followers, still tweeting)?

While the future remains to be seen, one unassailable fact remains true in the age of politics and social media: if nobody’s parodying you, it’s probably because no one is listening.