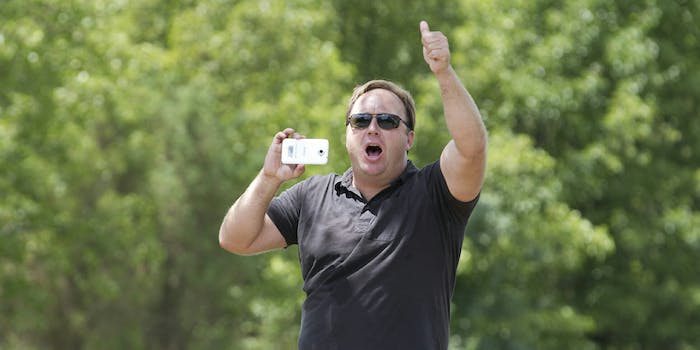 The discussion was outlined in emails.

Instagram is considering banning Alex Jones from its platform, according to a new report.

Business Insider obtained an email chain that showed executives discussing whether to label Jones, who runs InfoWars, a “hate figure” and subsequently ban him from the social media platform.

The discussion stemmed from a now-deleted post from Jones that some executives said was anti-Semitic. As Business Insider noted, it showed caricatures of Jewish men sitting around a Monopoly board. Underneath the board, other people are hunched over, propping it up.

An email shows there are “currently internal discussions around his designation as a hate figure,” which would ban him (and support of him) from Instagram. He was banned from Facebook last year. An investigation by the Daily Dot revealed how Jones was circumventing that ban. In February, 22 additional accounts related to Jones were banned.

The executives also discuss Facebook’s recent ban of white nationalism from its site, with one executive saying that keeping Jones would allow the “media to say we’re being inconsistent or ineffectual with our policy enforcements.”

You can read all of the Business Insider report here.

Update 10:33am CT, March 29: Instagram told VICE that the account run by Jones did not violate its community rules.

“Whether an account is removed or not on Instagram depends on the severity of the violation and a person’s history on Instagram, including previous removals,” a spokesperson for Instagram told the news outlet. “For example, some content is so bad that posting it just once means we would remove the account immediately. In the case of other violations, we may warn someone the first time they break our Community Guidelines. If they continue, we may remove the account altogether.”