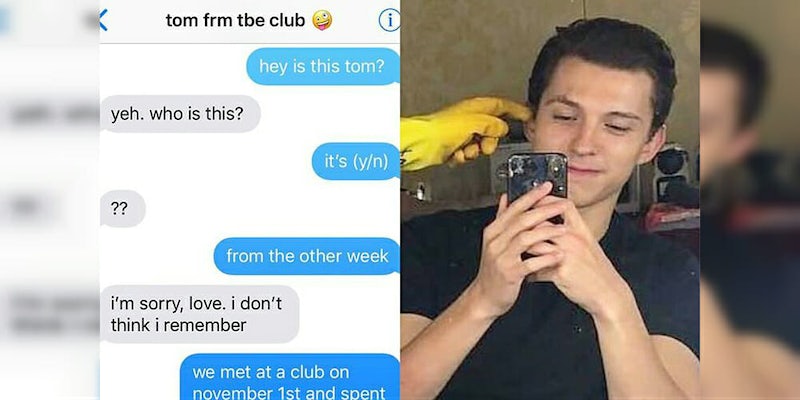 So this is what the kids are up to these days.

Without context, a single image from an account using the #imagines tag is almost indecipherable. These aren’t leaked iMessage conversations with celebrities—they’re fictionalized ones, with the viewer of the image as the main character in the fiction.

Fanfiction that pairs the reader with whatever character they desire has been around for quite some time (if you don’t believe me, check out the first-person tag on archiveofourown.org), but it’s usually not so visible in the mainstream. For a long time, Tumblr was the social media platform for fanfiction, but the adult content ban and the subsequent loss in users may offer some explanation as to why fanfiction is becoming more prominent on other social media platforms.

Different accounts are taking different approaches to making their #imagines. Some are sharing self-contained snippets of flirty or funny conversations that aren’t intended to be a part of a greater narrative.

Some accounts are telling longer, dramatic stories, like this popular Tom Holland text account that has stories of the reader having Holland’s babies, having a pregnancy scare with him, sharing the Christmas season with him, or more recently, breaking up with him after he cheated on the reader. When referring to the reader, the writers behind these fictions will often use y/n for “your name.”

In some ways, it’s interesting to see fanfiction evolve to fit the new rules of the internet. Screencaps of text messages is a unique way to format fanfiction for a platform like Instagram. On the other hand, the fact that almost all of the popular accounts and posts are about real people rather than fictional characters is more than a little uncomfortable. While fanfiction about celebrities is nothing new, fake screencaps of iMessage blur the fictional space and make this kind of fanfiction particularly awkward from the outside looking in.