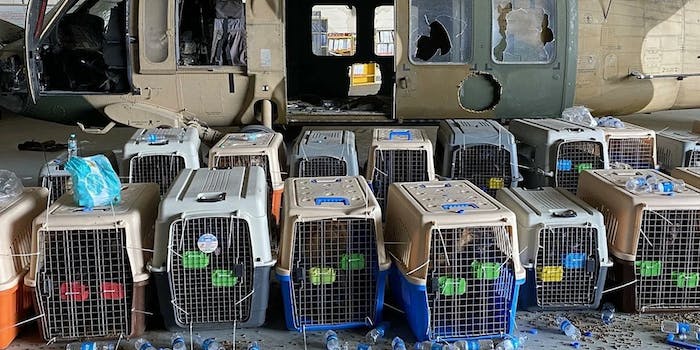 Despite viral claims, the DOD says the dogs in question were strays.

The Department of Defense (DOD) has denied that the U.S. left behind military service dogs in Afghanistan after the claim went viral across social media this week.

In countless tweets on Monday, a photograph of dogs in kennels at the airport in Kabul, Afghanistan spread online alongside allegations that the administration of President Joe Biden had abandoned the canines.

Critics saw the claim as further evidence of Biden’s disastrous handling of the withdrawal from Afghanistan, which was officially completed on Monday after a 20-year U.S. military presence in the country.

The allegation was particularly popular in right-wing circles, with political commentators such as Jack Posobiec using the claim to bolster their own profiles with viral hashtag campaigns.

But the allegation does not appear to be true.

In a statement to USA Today, a DOD spokesperson said that “the US military did not leave any dogs in cages at Hamid Karzai International Airport,” including military working dogs.

Although some online suggested that the dogs had been contracted by the military, the DOD further stated that all of the canines were actually strays.

USA Today reporter Matt Brown noted that the Kabul Small Animal Rescue had acquired a plane to remove the animals but that the flight never arrived. The DOD added that the animals could not be flown out on military flights due to customs issues and that the US had “prioritized evacuating people first.”

Although it appears the viral claim has been debunked, numerous reports showed that animal rights organizations had begun soliciting donations in order to rescue the alleged service dogs. It remains unclear if any of those organizations will return those donations now that the canines in question do not appear to be linked to the US military.