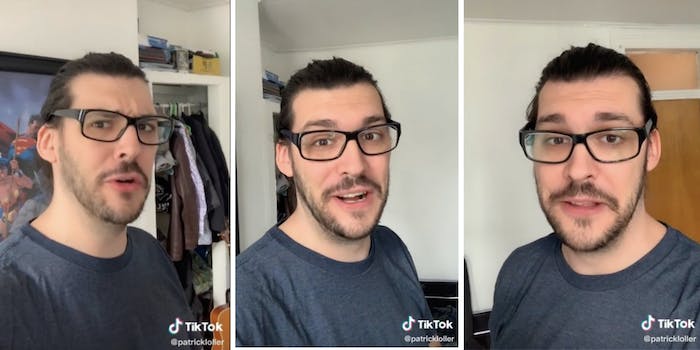 A veteran’s smug Afghanistan takes are dividing the internet

You've probably seen these videos on your feed.

As the world watched the Taliban make swift work of overtaking the Afghanistan government, there has been no shortage of finger-pointing to assign blame. President Joe Biden took a fair share of slack for his initial silence as the attacks unfolded, and people even flooded the Instagram account of former President Barack Obama with pleas to help the fleeing Afghani people. But perhaps some of the hottest takes currently making their way around the internet are from a former United States veteran who served as a medic in the Afghanistan war.

Patrick J. Loller, a self-described “right-wing troll,” has been taking to TikTok and Twitter to share their thoughts on the unfolding humanitarian disaster. (Loller, who is non-binary, uses they/them pronouns.) The war was obviously an extremely complex issue, which has been shaped under two decades of policy under four sitting U.S. presidents. However, Loller claims that they and other veterans are now the ones being criticized in a series of outspoken TikTok videos and tweets.

“Hey, if you’re one of those people attacking veterans on the internet for lamenting the fall of Afghanistan, you’re a bad person,” said Loller in one video. “I don’t much care for your half-formed thoughts about American imperialism, as you attack the very people who end-stage capitalism forced into the military.”

In another three-minute-long video that has been viewed over 1 million times, Loller attempts to explain why “complex problems don’t have simple solutions.”

“Hi, I’m a disabled veteran and on behalf of all veterans, I’m gonna need you to stop asking us to have an answer to the complex problem that is Afghanistan, K thanks,” says Loller, before attempting to unpack their thoughts about Biden’s decision. Though Loller certainly brings up some fair points throughout the video, their smug, confrontational style isn’t winning over many fans.

With the fate of so many Afghans, particularly women and girls, hanging in the balance, their decision to put themselves front and center also seems like an odd choice. After all, is anyone seriously expecting a solution from a veteran, of all people? At any rate, Loller continued to double-down on their rhetoric on Twitter to own the leftist “reactionaries” and equating them with alt-right trolls.

Unfortunately, Loller’s attempts to paint themself as some kind of white knight of the Afghanistan people has fallen short of the mark. At least one user compared Loller to noted Israel sympathizer “eve fartlow,” and others are dredging up some old tweets that seem to conflict with their altruist posturing.

“I deleted my dating apps. What happened to romance? I just want to steal a girl from the village I’m at war with,” Loller wrote in one since-deleted tweet.

Others pointed out the flaws in Loller’s logic, or just generally roasted them:

No one is denying that a veteran who served in the Afghanistan war might have a unique perspective on what’s currently happening over there. But sadly, no amount of squabbling on the internet is going to help refugees desperately trying to escape the Taliban.