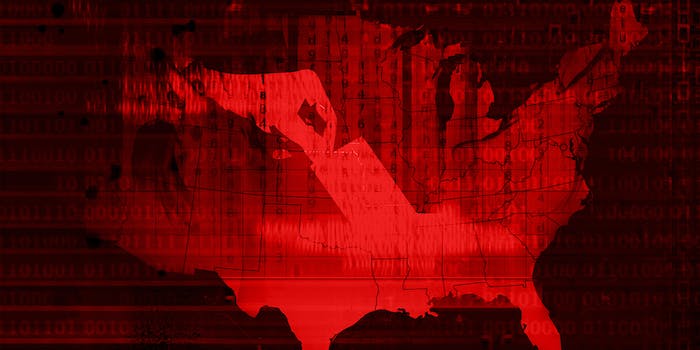 A running list of hoaxes, misinformation, and Election Day conspiracies

Everything that's not true, in one place.

On Election Day, you can expect a plethora of hoaxes, conspiracy theories, and disinformation floating around the internet ether. The Daily Dot’s Mike Rothschild is here to walk you through them all. Please hit “refresh” for the latest updates.

Contrary to a viral meme going around, Wisconsin did not count 3,239,920 votes from 3,129,000 registered voters in the 2020 election. The viral tweet, from conservative activist Mike Coudrey, compared the vote count from 2020 with the number of registered voters for the 2018 midterm election. According to the Wisconsin Election Commission, the state had 3,684,726 active registered voters leading up to the election and currently sits at a vote count of 3,296,836 with 97% of the vote in.

10:20pm CT: QAnon and the far-right are turning on Fox News

President Trump’s relationship with Fox News has gone from a mutual lovefest to Trump complaining that it was “the beginning of the end” for the network after they dared to interview a Democratic senator. It appears as if that curdling has extended to the president’s most rabid followers on Election Day, as a number of far-right-leaning figures vocally complained about the network’s coverage of the 2020 election.

“@FoxNews is reporting very erratically” claimed Sebastian Gorka on Twitter, echoing sentiments that the network that had previously been written of by liberals as “state TV,” was not displaying sufficient loyalty to President Trump, particularly due to the network’s overall caution as far as Trump’s performance. In particular, people were upset with its refusal to call Florida for Trump fast enough,

Or as prolific QAnon Twitter account @CJTruth put it “if you are stressed out please stop watching FOX NEWS. They are controlled opposition at best right now. Trump will win tonight BIGLY!”

Meanwhile, despite California not having voted for a Republican since 1988, Trump’s most rabid supporters were convinced that Trump had a shot to win it. And when Fox News called the state almost immediately for Biden, they were both displeased and deeply confused.

Of course, liberals had many of the same complaints about the New York Times’ coverage of the race, particularly that the infamous “needle” that shows where various contests are at. It is often showing far less rosy projections for Biden than Fox News right now.

Twitter is taking preemptive action against prolific spreaders of misinformation and conspiracy theories by banning multiple high-follower accounts. After parlaying her failed run for Congress in California into a career as a budding right-wing media star, prolific QAnon supporter DeAnna Lorraine Tesoriero was banned from Twitter on Tuesday afternoon, possibly for tweets claiming that she was “hearing all conservatives are going to be banned” from Twitter in the event of a Biden win, or for a tweet claiming Biden would “invite millions of people into the country whose only goal is to behead you.”

Twitter also took action against prolific conspiracy theory author and speaker David Icke, though it’s not immediately clear why the creator of the “reptilian elite” conspiracy was suspended now, given that Facebook deplatformed him back in May.

Just like they did in 2018, QAnon supporters believe that the 2020 election can only end one way: It will be a “red wave” that swamps the Democratic party and gives President Donald Trump a crushing victory. Of course, the 2018 midterm election ended with Republicans losing 40 House seats. But with QAnon, this time is always different. So Q believers think that the Deep State has a plan for how to deal with a crushing Biden loss. It will make sure nobody ever knows about it by shutting down the internet and plunging the entire world into chaos. And it’s a plan that only they seem to know about.

“They might have to shut down the internet earlier than they planned,” declared the prolific QAnon supporter “Julian’s Rum,” with others warning Trump voters to back up their sensitive materials offline and document everything. Some Q promoters, though, believe the clues about the outage go back even farther, to a cryptic remark that Q made on Nov. 4, 2017: “10 days. Darkness,” and again the next day, writing, “10 days.Darnkess [sic]. Since then, the “ten days of darkness” concept has been brought up over and over by both the Q poster and their acolytes to mean some kind of massive, coordinated internet outage that will coincide with the great deep state purge called “The Storm.”

The “ten days of darkness” have never actually arrived, despite Q claiming at least one other time that it had already started. So it’s not clear if the Deep State will this time, or when it would actually start. But if you’re going to shut down the internet, you might as well do it when your chosen candidate loses horribly in a red wave, right?