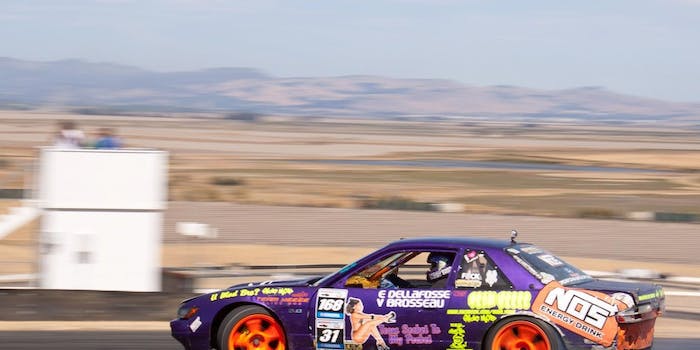 A couple of muscle-car maniacs are under investigation by California police—and 4chan's auto community—after stopping traffic on a busy highway to do some donuts.

A couple of muscle-car maniacs are under investigation by California police and 4chan’s auto community after stopping traffic on a busy highway to do some donuts.

The antics on California’s Interstate 880 were caught on tape by a stopped motorist Saturday afternoon. The short video shows about four different cars, including a Mustang and Nissan 240sx, driving in circles while a handful of people look on.

The highway shenanigans inspired 4chan’s auto forum, /o/, to become “Automotive White Knights” in search of the driver’s identities. So far the community seems to have narrowed down the owner of a Nissan Silvia thanks to its bright rims, purple coloring, and stickering.

“[H]onestly, if I was stuck in that jam because of them, I would have driven my old crown vic directly into the center of their bullshit at full speed,” one anonymous 4chan user wrote. “[N]obody there would testify against me except the boy racers on trial, I have a spare car, and god willing i’d get out with minor injuries. but alas, i live on the east coast, and don’t have to deal with this kind of retardation.”

The California Highway Patrol (CHP) is currently investigating the incident and studying the video for license plate numbers, the Oakland Tribune reported.

“It was like something out of a video game,” CHP spokeswoman Diana McDermott told the Tribune. “It is extremely reckless driving. In no way are our freeway systems designed for this.”