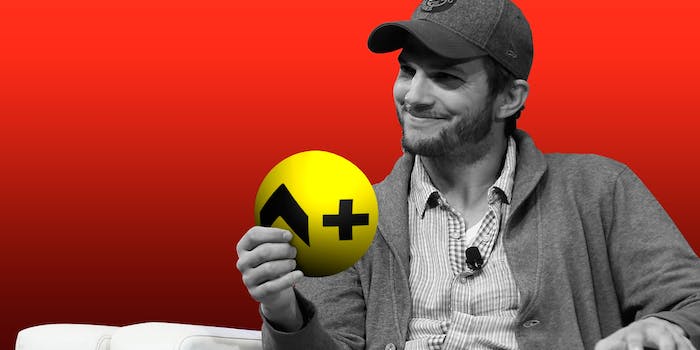 A+ promises to "leverage viral social storytelling to create positive change in the world." The truth is rather uglier.

Ashton Kutcher’s flagship viral content site has republished large quantities of material from across the Internet apparently without the original authors’ consent, a Daily Dot investigation has discovered.

Relaunched in late 2013 to little fanfare, Aplus.com (stylized as A+) bills itself as “the fastest growing site in the history of the Internet.” It currently claims almost 30 million unique monthly visitors, though there’s no way to verify this number.

Kutcher—the television and movie star, Bitcoin user, and avid technology entrepreneur with financial ties to Path, Foursquare, Duolingo, and Skype—is both a cofounder and an investor in A+, according to the company’s AngelList profile. It’s unclear, however, if he’s the only investor, and how much money he has invested. The company first launched as A.plus in 2011, and it was essentially a custom Twitter client produced in partnership with mobile ad company UberMedia.

The current site’s success can be directly attributed to Kutcher’s constant promotion of its articles on his verified Twitter and Facebook pages, the latter of which boasts 18 million subscribers. Kutcher even promotes the site on his semi-private personal Facebook account, which the Daily Dot found using his verified Quora profile, and has fashioned his various social media accounts after A+’s design. 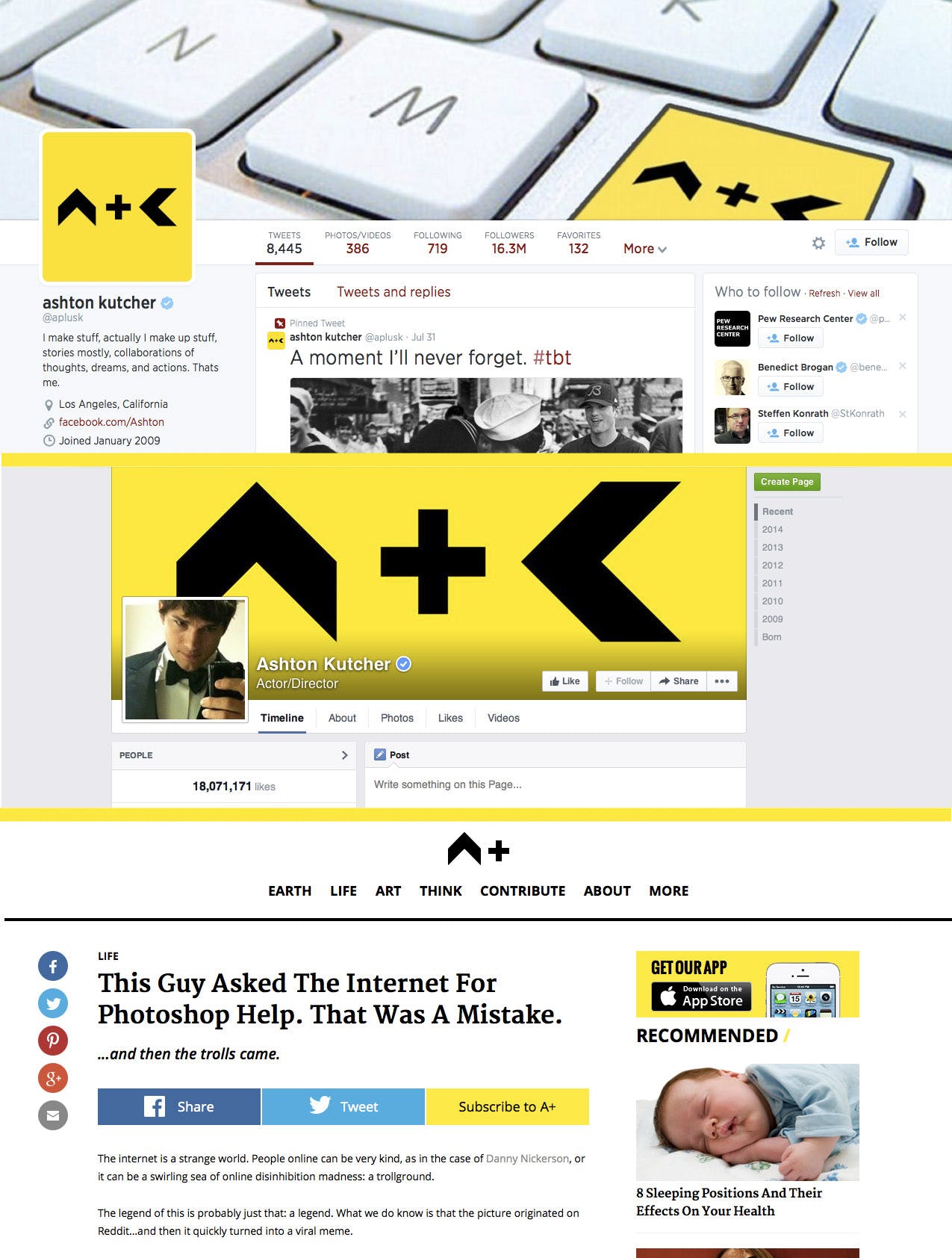 Outside of Kutcher, the site itself is fairly enigmatic, with no editorial masthead, no author pages, and until recently, not even an About page.

So who is actually publishing the articles on A+, and perhaps more importantly, where are the articles coming from?

A+ markets itself as a platform with a social conscience, aiming to “leverage viral social storytelling to create positive change in the world”—but the truth is rather uglier. The site has lifted content from BuzzFeed, the Huffington Post, Cracked, Matador Network, and elsewhere—all seemingly without the authors’ permissions and with little in the way of source credits.

The A+ article “This Girl Was Sent Home In Tears Because Her Dress Was Too Short. So Her Mom Did The Most Awesome Thing Ever.”, for example, is almost identical to a BuzzFeed post by Ryan Broderick. The only significant difference, besides the headline, is the removal of one photo and the addition of a request for readers “to share it with your friends.”

That article, along with every post published to the site before July, was deleted shortly after we reached out to A+ for comment. Here’s a screengrab comparing the two versions: 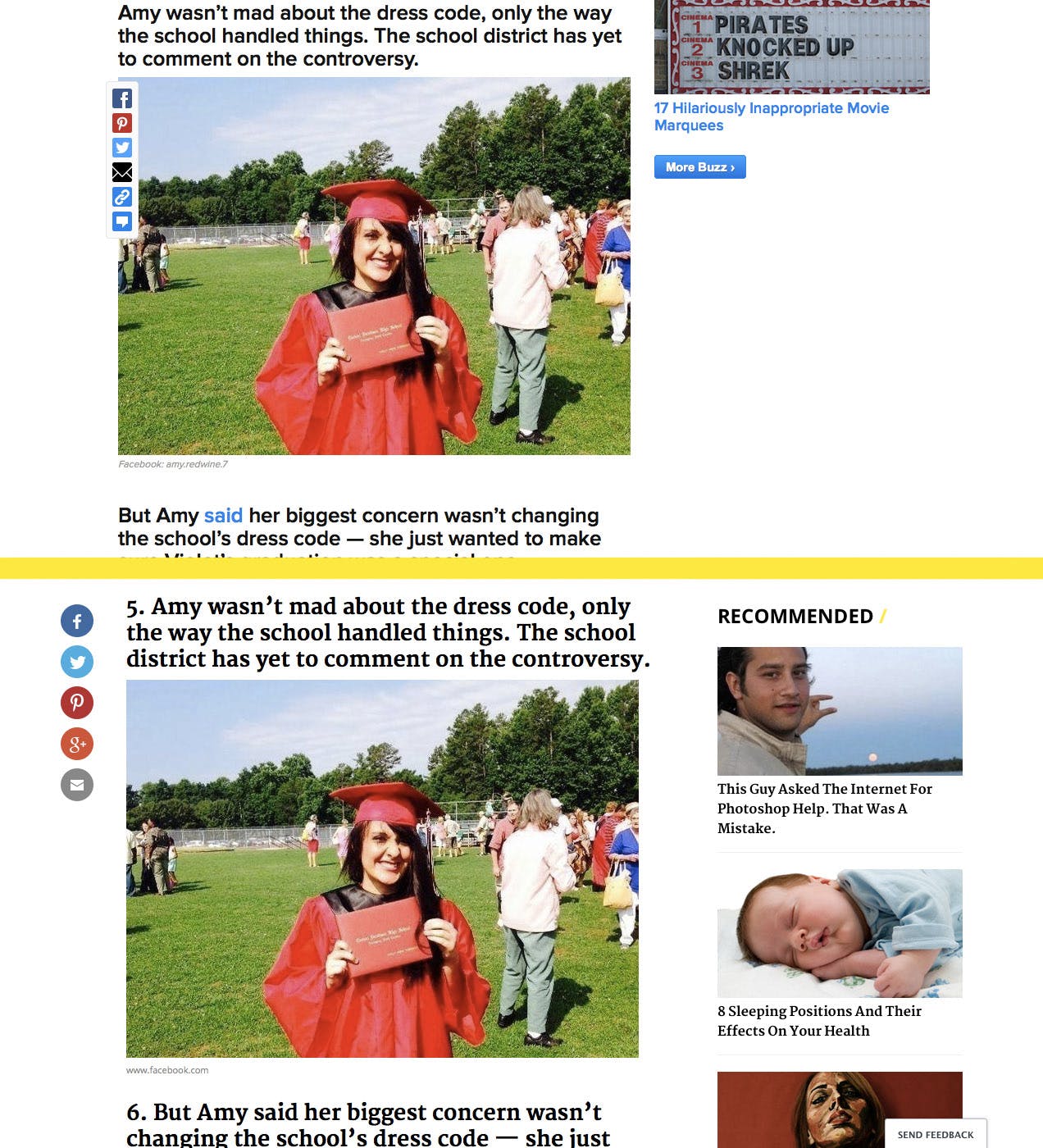 The BuzzFeed article, followed by the republished A+ story. Note the absolutely identical wording.

A BuzzFeed listicle celebrating Independence Day (“The 26 Most American Comebacks In The History of The World”) was also reposted, with the captions and the headline slightly altered. The same is true of A+’s “50 Awesome Tattoos Inspired by Books You Grew Up With As A Kid,” which is structured identically to a popular listicle by Alanna Okun.

BuzzFeed was by no means the only website targeted. Huffington Post’s “12 Times The Women of ‘Game Of Thrones’ Were Super Fierce” was also lifted by A+, except with the introduction stripped and another plea for readers to share the post: “Those are some seriously strong women! Be sure to share this post with your friends by clicking below.”

Likewise, “The 30 Funniest Movie Mistakes Ever. I Can’t Believe I Missed #28” was recycled from Cracked.

Screenshots of the original Huffington Post article (above), alongside the A+ copy (below).

Some of the stories we looked at did include a source attribution link. Adding a source, however, “does not constitute absolution from the laws governing lifting someone else’s material, unedited, without consent,” according to Peter Y. Sussman, a former editor at the the San Francisco Chronicle and a media ethics advocate. 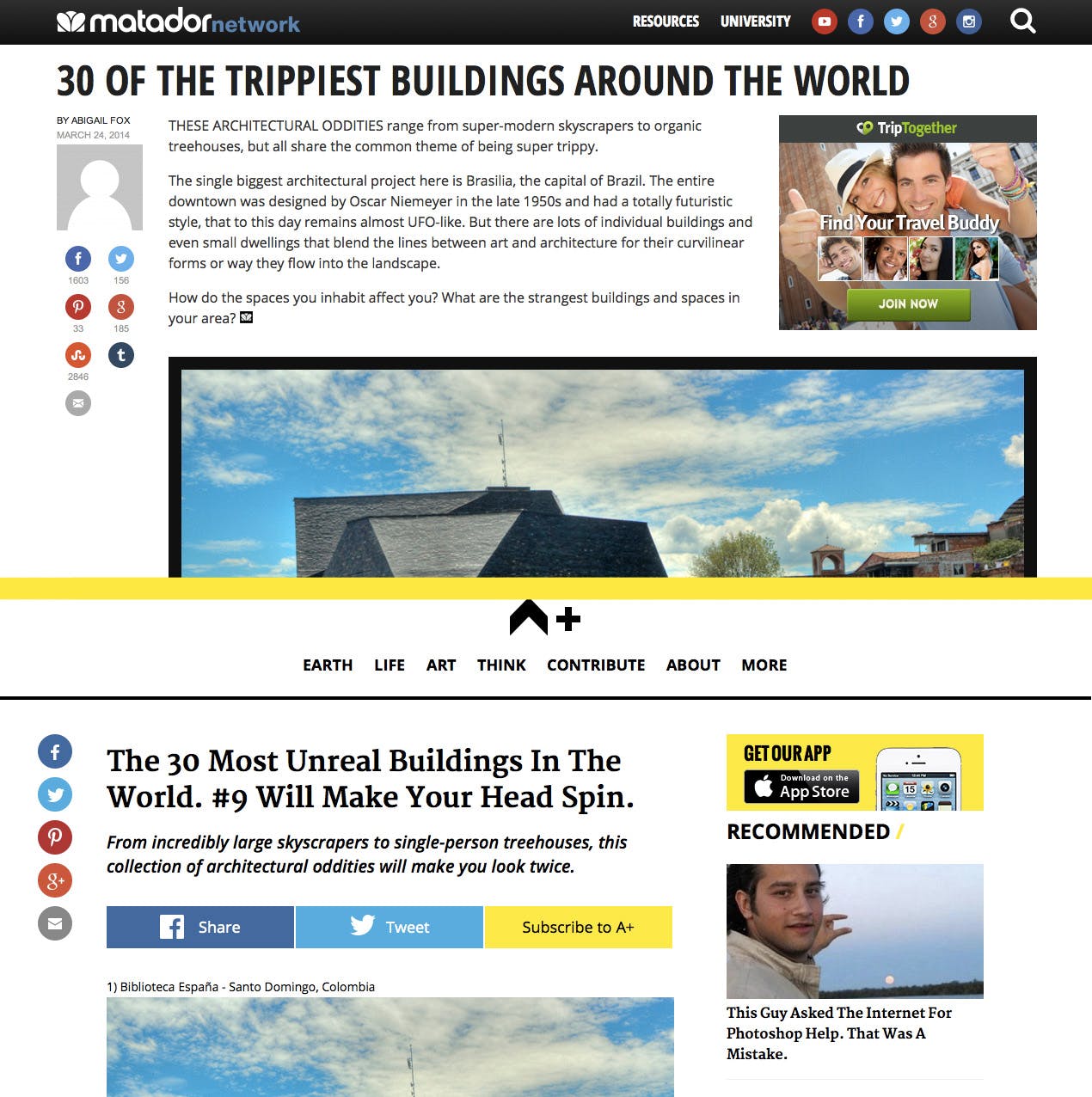 A Matador Network article (top) that has been copied on A+ (bottom).

A+ also features the work of numerous photographers and original compositions, often without proper attribution or credit.

The A+ article “15 Awesome Internet Tricks You Have To Learn Right Now,” for example, reposted original GIFs created for the corresponding, original BuzzFeed article. And instead of properly embedding Instagram photos, which retains authorship credit and also links back to the source, the site often strips them from the source and republishes the images without credit. This violates Instagram’s Terms of Use.

When we reached out to Instagram users whose photos had been republished on the site, multiple people told us they’d never been asked permission.

“Aplus did not credit me [by name] so I am [not] okay with it. I would not have even know had you not contacted me,”  Chelsea, aka americanmudbloodinlondon, told us after we inquired about her photo appearing on A+.

The beginning and conclusion of an original BuzzFeed story and a republished version on A+ for comparison. All 26 images were identical.

The legal status of some listicles is murky, but the U.S. Copyright Act and the Trade-Related Aspects of Intellectual Property Rights (TRIPs) Agreement does offer copyright protection for “compilations” of materials. Such works, according to Matthew Savare, a partner at Lowenstein Sandler LLP in New York, are defined as “work formed by the collection and assembly of preexisting materials or data that are selected, coordinated, or arranged in such a way that the resulting work as a whole constitutes an original work of authorship.”

Without commenting on the specifics of the case, Savare said that “many listicles and short-form articles” could qualify as a “compilation” according to the statutory definition and existing case law.

“If so, creating a work that is substantially similar to that work could constitute copyright infringement,” Savare said.

Dr. James Griffin, a senior lecturer of Law at the University of Exeter who specializes in intellectual property law and technology, added that the criteria for copyright infringement in both the U.K. and the U.S. accounts for “labour, skill and effort,” three factors that would certainly describe the curation of an original listicle.

Even still, Deji Olukotun, Freedom to Write Fellow at PEN American (a pro-free expression and authors’ rights advocacy group) suggested it might be difficult to bring a copyright infringement case to trial. The American courts operate on the basis of the “equity principle,” expecting plaintiffs to come to court with “clean hands”—and the province of the photos and content in many original listicles is itself of dubious origin, and often unattributed. In such circumstances it would be difficult to convince a judge of the merit of any potential copyright infringement, he says, to say nothing of the need to prove actual monetary damages.

Of course, A+ is hardly the only site using hastily recycled content and cleverly packaged headlines to capture viral traffic on Facebook, but it’s certainly one of the most successful. In a few short months, A+ has grown from irrelevance to the 3,000th most-popular website in the world—and the 1,200th in the United States. 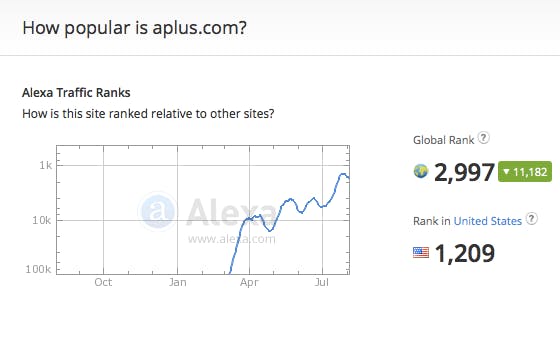 In those cases where the law is not clearly broken, the issue with A+ is a matter of transparency.

From the site itself, it’s not clear who’s involved in the company. There is no masthead, listing staff or contributors, and almost none of the articles give any indication of who wrote them. We found one article with an author—Alex Stone, a journalist and amateur magician. The LinkedIn profile for former BuzzFeed writer Justin Carissimo lists him as the site’s editor as of August 2014.

When we initially reached out to A+ for comment, we received a response from K.S. Anthony—who describes himself on his (since-deleted) LinkedIn profile as a “Writer/Content Developer at A+” who attended Columbia and Yale. Anthony did not respond to any subsequent emails.

After the Daily Dot confronted A+ on Aug. 6 about the issues laid out in this article, the company appears to have scrubbed its entire archive of content published before July. In an apparent attempt to erase all trace of the website’s post history from the Internet, it also deleted every tweet from its official Twitter account, @aplusapp, before Aug. 6, and every post by the official Facebook page before Aug. 4. The company never directly responded to our emails. 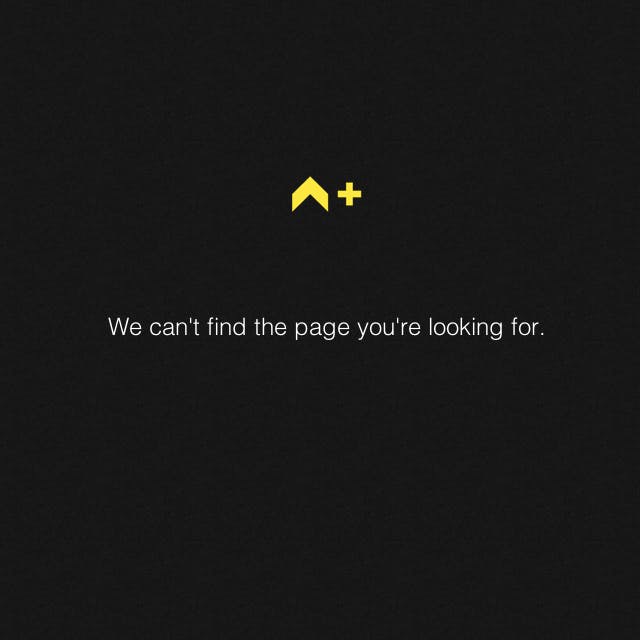 A+ appears to have missed a spot, however: “9 Wedding Photobombs You Wish You Could Unsee,” a post with suspicious similarities to the Huffington Post article “9 Oblivious Human Beings With No Regards For Weddings,” is currently still live.

Kutcher did not respond to a request for comment at press time.

Update: Evan Beard of A+ provided the Daily Dot with the following statement: “We take these allegations seriously and are looking into them. The content that was removed was taken down as a precautionary measure. Respecting the intellectual property of others is extremely important to us.” He declined to answer any of the Daily Dot’s outstanding questions about the company’s procedures and policies.

Photo via TechCrunch/Flickr (CC BY 2.0) | Remix by Jason Reed